Semantic Corpus|Economy|Will Ukraine be able to feed itself and the world?
Economy

Will Ukraine be able to feed itself and the world?

Every third bottle of oil and every tenth loaf of bread in the world comes from Ukraine. Currently, the war is blocking the work of Ukrainian farmers: sowing is under threat, important logistics chains have been disrupted, and export of agricultural products through seaports have been stopped. The aggressor is bombing agricultural facilities, mining fields, and is stealing Ukrainian equipment. How has the war affected farmers’ activity? Does this indicate the beginning of a famine? Read more about the issue here. 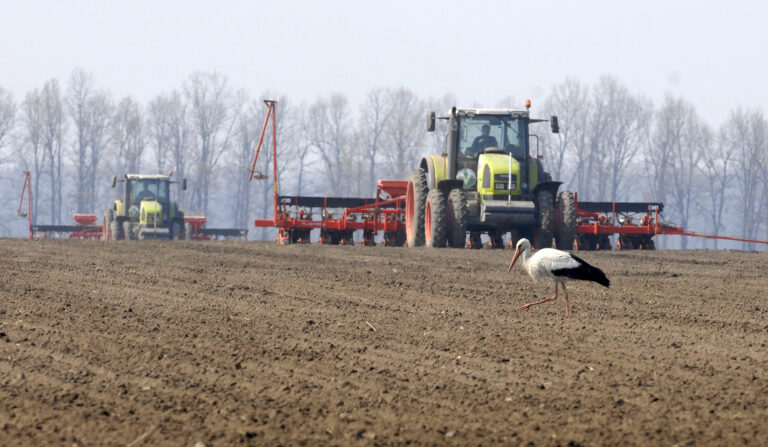 Overview of the Ukrainian agriculture

Ukraine has always been an agrarian country thanks to its favorable climate, location, and fertile soils. Due to this, at the beginning of the 20th century Ukrainian territories were almost completely under control of the Russian Empire. But even then we were the leaders on the international food market.

Being part of the Soviet Union, Ukraine continued to amaze with its crop harvest. For example, the Ukrainian Soviet Socialist Republic occupied only 2.7% of the territory of the USSR, but produced about 25% of all agricultural products of the Soviet Union, including 62% of sugar beet, 59% of corn, 44% of sunflower, 26% of potatoes, and 24% of wheat.

Despite its independence gained in 1990-1991, Ukraine has lost control of its market. There was a crop failure, which resulted in a sharp drop in the gross harvest. This decline set a trend for the next few years, yet stabilization of the economic situation and favorable climatic and natural conditions facilitated the sector’s recovery.

Vigorous development of the Ukrainian agro-industrial complex (AIC) or agribusiness took place in 2000-2010 when its business model was updated. Ukraine began to actively expand its production range, significantly increasing its export.

From 2010 to the present, Ukraine’s agribusiness has been at its height.  Farmers have learned to integrate modern technology and advanced methods of doing business. Now, they apply drones, precision agriculture, farming management systems, etc.

Within 30 years of its independence, Ukraine has become a powerful farming state that grows, processes and exports a great variety of products. 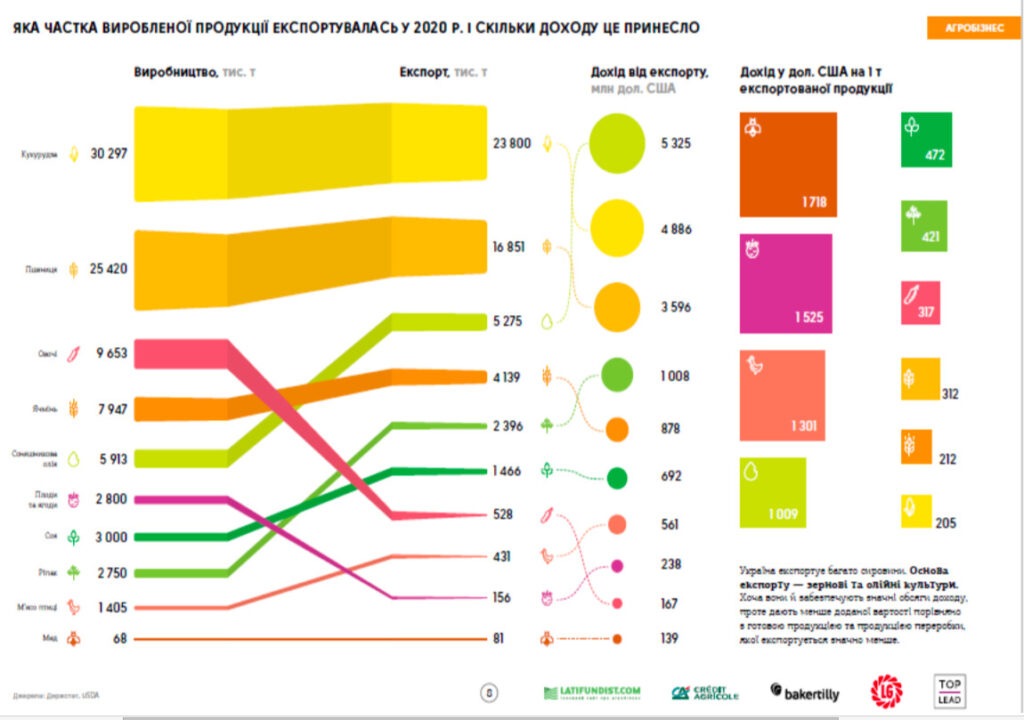 What share of products was exported in 2020 and what was the revenue?

Ukraine exports a lot of raw materials. The basis of export is grains and oilseeds. Although they provide significant revenues, they nevertheless give less added value compared to finished and processing products which are exported much less.

Most Ukrainian products were exported to China, Turkey, the Netherlands, Israel, Spain, and Italy. In general, Ukraine provides about 10% of world wheat exports, including food wheat, about 16% of world corn  and almost 55% of sunflower oil exports.

This means that every third bottle of oil and every tenth loaf of bread in the world comes from Ukraine.

War is changing the rules

The issue of carrying out the sowing campaign in 2022 and its conditions has been a point of stress for Ukraine so far. Experts predict that this campaign will be the most difficult in the history of Ukraine’s Independence.

According to Olena Neroba, a Maxigrain business development manager, winter wheat traditionally accounts for 90% of all Ukrainian wheat.

Due to active hostilities and territories being partially or completely occupied or surrounded, the acreage may be reduced. 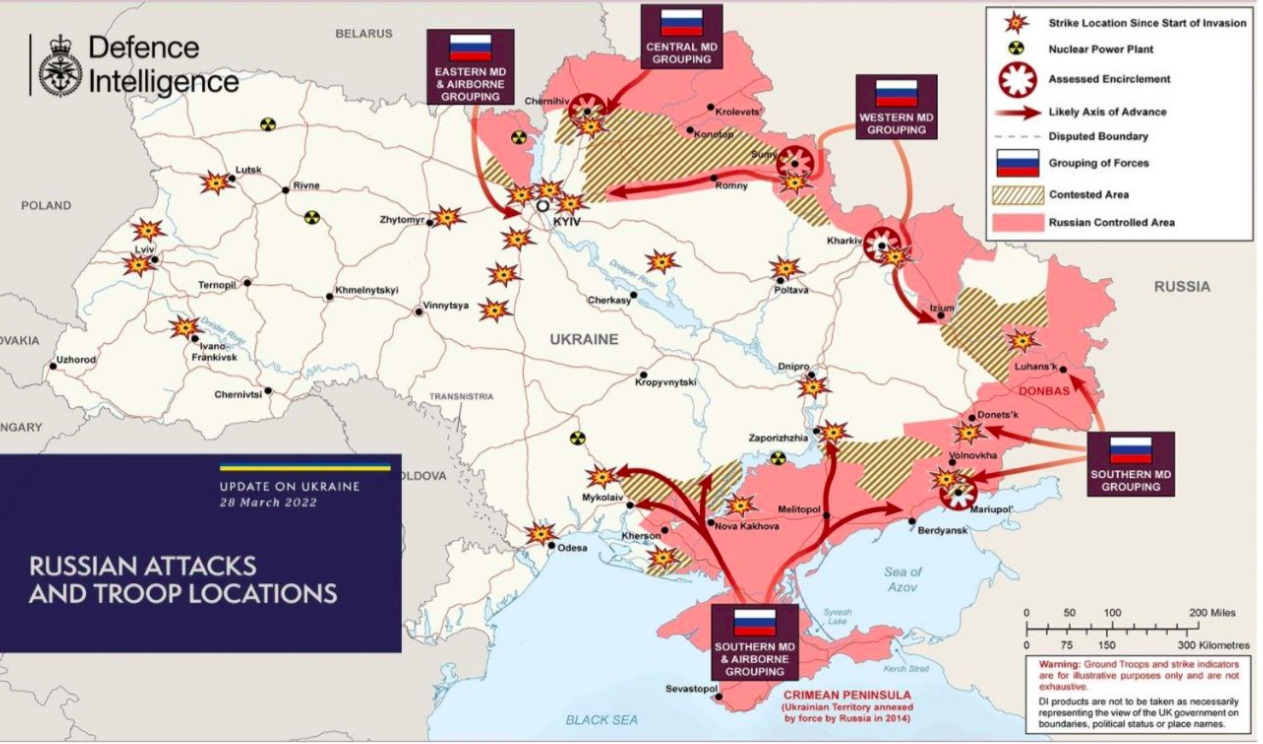 Almost all key regions of Ukraine engaged in cultivation of wheat have already been sown so far. But not all farmers are  able to carry out field work, apply fertilizers, etc.

Also, the occupiers are constantly stealing farming equipment. One of these cases was recorded in Chernihiv region. There, the Russian military stole tractors to evacuate their hit vehicles.

Strategically important objects such as elevators, ports, and railways have fallen under missile attacks.

In safer areas where work can be carried out, there are other problems, says Olena Basanets, Editor-In-Chief of the Ukrainian edition of SuperAgronom.com. Agricultural workers complain about the lack of fuel or impossibility of buying it in the required volumes due to scarce funds. The seed material or rather its shortage due to complicated logistics or lack of funds is another problem for Ukrainian farmers today.

The issue of fertilizers is also acute. According to CNBS, due to the Ukrainian-Russian war, the price of fertilizers in the world has reached the previous record level of 2008. The fact is that until 2022, Russia was the world’s largest exporter of nitrogen and the second-largest supplier of potash and phosphate fertilizers. Currently, chains of imports from the aggressor country are disrupted. The increased price of gas has led to the curtailment of fertilizer production in Europe. This further narrows the already tough market.

If in March Ukrainian farmers are not able to apply fertilizers, experts predict decreased harvest of winter wheat on average by 15% .

As for corn, sunflower and other spring crops , on March 25, the Ministry of Agrarian Policy and Food of Ukraine reported on its  website that 11 regions of Ukraine began sowing. 150 thousand hectares of them have been sown so far. Acreage is sown with corn, soybeans, sunflower, millet, buckwheat, oats and sugar beet.

World Food Security: What to Expect

The war physically paralyzes not only the course of sowing. According to Yurii Havryliuk, the partner and director of  the consulting and analytical company Barva Invest, the export of agricultural products is also under threat. Moreover, this concerns not only the areas where military actions take place, but also peaceful territories. This happens because of:

The enemy is blocking the sea, by which Ukraine used to export up to 90% of all grains and oilseeds. As a result, there is a decrease in foreign exchange earnings and budget revenues, lack of working capital, idle port infrastructure, and a threat to international food security. Concerning the latter, according to the head of the World Trade Organization (WTO) Ngozi Okonjo-Iweala, 35 African countries depend on food imported from the Black Sea region.

Ukraine provides wheat to the World Food Programme, a UN agency that provides emergency supplies to countries in conflict or experiencing natural disasters such as famine.

Head of the World Food Programme David Beasley says that the number of people facing potential starvation worldwide has already risen from 80 to 276 million due to coronavirus, climate change, the coronavirus crisis and the war in Ukraine.

David Beasley is sure that the war in Ukraine will cause an increase in world food prices with catastrophic consequences, especially for the poor.

World analysts warn that the war will affect production of grain and oilseeds and double world prices for wheat, processing products and oil. In most European countries there is a shortage of oil. You can buy this product with  “per person” restrictions.

Currently, replenishment of stocks depends solely on appropriate logistics connections. Yet, consequences of reduction of acreage in Ukraine because of the hostilities of 2022 may be much greater.

The main Ukrainian publication on agribusiness Latifundist.com publishes analytical data, according to which in early February there were about 26.6 million tons of grain and leguminous crops in warehouses and production facilities of Ukrainian farmers. As of February 1, remains of sunflowers made 6.1 million tons, those of soybeans and rapeseed – 11.5 million tons. 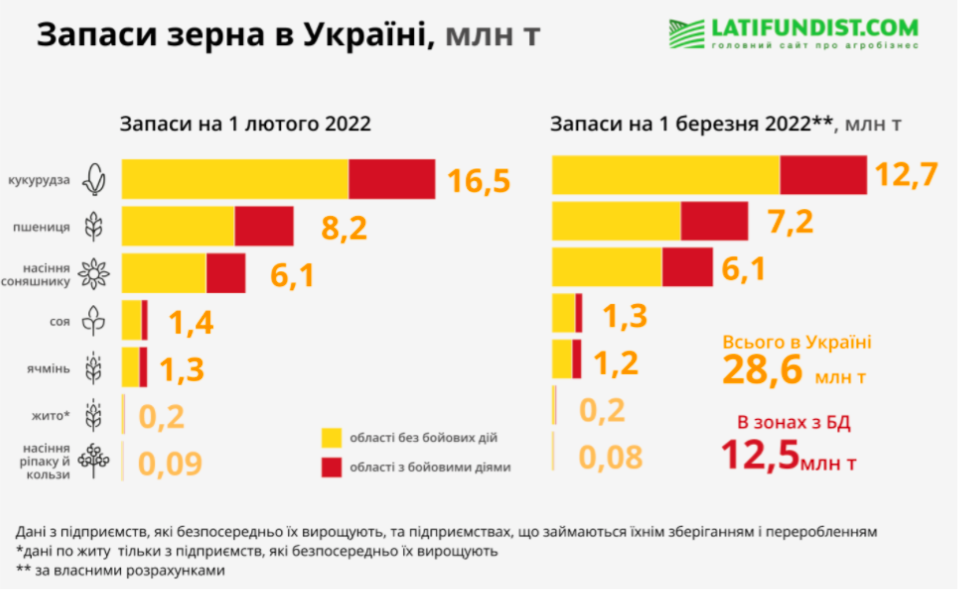 According to analytical estimates of experts, if Ukrainian farmers manage to sow 75% of arable land in the regions of hostilities, the share of acreage lost in war conditions will decrease by 12.5%, i.e. 24.8 million hectares will go under crops.

In case of a less optimistic scenario, when farmers process 50% of the total amount of land in the regions of active hostilities, 21.7 million hectares will go under sowing, which is 23.3% less than the amount of acreage in 2021.

A reduction of acreage by 34.1% will occur if farmers are able to sow only a quarter of the total amount of arable land in Ukraine, i.e. 18.7 million hectares.

Ukraine has exported most of the harvest, which means that its importers are facing the threat of hunger. Nevertheless, Ukrainians will be able to count on food sufficiency. How much the products will cost is difficult to predict at the moment. Of course, the war will flatten the pockets of Ukrainians. Farmers and the military will be paying a heavy price solving the problem. They are working in extremely difficult conditions, risking their lives for the future not only of Ukraine, but of the world.