Semantic Corpus|Humanitarian|Under the guise of “the great Russian culture.” The history of undoing and oblivion: Ukrainian monumentalism.
Humanitarian

Under the guise of “the great Russian culture.” The history of undoing and oblivion: Ukrainian monumentalism. 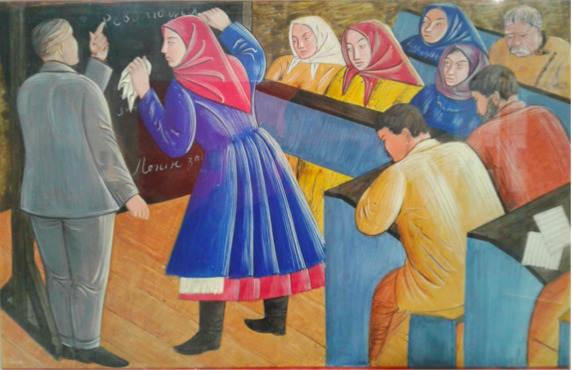 After more than two months of the war, Europeans still see the idea of canceling Russian culture as something that only the emotionally imbalanced and traumatized Ukrainians would do. Many European educational and cultural institutions have even declared common programs for Ukrainians, Russians, and Belarusians (for instance, the University of Amsterdam offers help to Russian and Belarusian artists on the same grounds as the Ukrainian ones: https://bit.ly/3jJuXI1). There’s a deeply-rooted idea behind this phenomenon: the idea that the Russian liberals are victims of their own regime, along with Ukrainians. Another, even deeper reason is the subconscious belief that Ukrainian culture is somehow inferior to Russian culture and will never be as attractive to the Western audience. As if Ukrainians and Russians were always on the same footing and the former just couldn’t create anything worth being regarded as highly as the Russian literature, art, and cinema.

It might come as a surprise to some Europeans, a closer look at the narrative of the provinciality and mediocrity of Ukrainian culture reveals its origin in several practices that started during the Russian empire. These practices continued through the USSR period and into the modern Russian Federation, meaning that it is not just the inhumane Stalinist regime in the USSR that is to blame for this. Such practices include but aren’t limited to murdering artists and writers and physically destroying their work, manipulating history and hiding Ukrainian achievements, and appropriating Ukrainian heritage whenever and wherever possible. In this article, we’ll view these practices through the example of one of the most distinguished manifestations of the Ukrainian Executed Renaissance – Mykhailo Boychuk’s school of monumental art.

Mykhailo Boychuk (1882-1937) was born in a tiny village in Halychyna. Thanks solely to his overwhelming talent, he received a European art education and started working in the most prominent cultural center of the time – Paris. Though he was surrounded by the geniuses of avant-garde art, Boychuk was not just another epigon of Picasso, but rather he founded an original art school of “Neo-Byzantism” which was rooted in Ukrainian visual constructs. The artist began working in Kyiv in 1917 as a teacher in the newly-created Ukrainian Academy of Arts. During the Civil War, Mykhailo Boychuk’s monumental art workshop didn’t stop working even under shelling, and by the 1920s it had became Kyiv’s most prestigious art society. The workshop had a lot to show: an in-depth study of the ancient Ukrainian tradition combined with a modern understanding of plastic arts and an original teaching philosophy. For example, the students were taught to grind and mix colors on their own, as the medieval masters did. All those advantages attracted the most promising young artists of the time: Vasyl Sedliar, Ivan Padalka, Oksana Pavlenko, and many others.

Despite their passion for the Ukrainian icon-painting and church frescoes of Kievan Rus, Boychukists wholeheartedly agreed with the communist ideas of society and state development. They actively engaged in agitprop and street art, collectively creating monumental frescoes based on romantic notions about the new environment in which the “New Human” will rise.

For instance, in 1919, Boychukists made the agitational frescoes for Lutsk Barracks in Kyiv, which the Red Army was occupying at the time. Among the frescoes’ themes were the workers’ unification, revolutionary scenes, and the everyday life of Red Army soldiers. The work was well-received, so Boychukists created a number of other fresco complexes in the following years.

None of which have survived to the present day.

Boychukists also worked with other non-monumental forms of painting (they preferred distemper over oil, like the masters of ancient Rus did), graphics, and ceramics. However, the life of villagers in the brave new Soviet world with its new freedoms and possibilities was the central idea that united most of the Boychukists’ works. 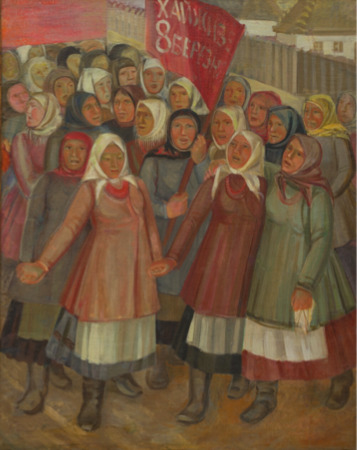 Surprisingly for the Boychukists themselves, they weren’t good enough to see the new future. Although they weren’t in opposition to the Soviet regime, this lent them no protection against the repressions. In 1926-1927 Mykhailo Boychuk, his wife, Sofia Nalepynska-Boychuk, Ivan Padalka, and Vasyl Sedliar went on an inspirational trip to Germany, France, and Italy. Later, this trip would become one of the reasons for their arrest and accusation of espionage and participation in a “national-fascist terrorist organization” which allegedly worked towards Ukraine’s separation from the USSR and the creation of a “Ukrainian national-fascist state.”

They executed Boychuk, Padalka, and Sedliar in July 1937 in Kyiv, and later, in December of the same year, Sofia Nalepynska-Boychuk followed them. Oksana Pavlenko was the only one of Boychuk’s favorite students who managed to survive because she had moved to Moscow in 1929 and stayed there. Even amidst the Great Purge of 1937, Moscow was safer than Kyiv.

Absurd accusations of fascism and a mind-numbing fear of the mere idea of an independent Ukraine – these patterns are painfully familiar to us. Nowadays, these accusations are used against every Ukrainian. Attempts to explain to Russians that we don’t have fascism and that peaceful Ukraine never planned to attack Russia have been faced with blind aggression and poorly-masked horror even before the war started. The very same horror forced the ancestors of today’s Russians to see a threat in completely loyal painters, absorbed by their art, purely because they displayed recognizably Ukrainian motifs in their work.

The visual dissimilarity of these motifs was considered dangerous on its own and thus had to be eliminated. As a result, all the great monumental works of Boychukists in Kyiv, Kharkiv, and Odesa were destroyed by the Soviet regime. Their paintings and graphics were also doomed and were accompanied by the works of other avant-garde artists who failed to comply with the laws of socialist realism, such as Anatoliy Petrytskiy, Oleksandr Bogomazov, and Oleksandra Ekster.

The designated tool to help with all this was soon introduced: museums began operating “special funds” of undesirable works. The Kyiv State Museum of Ukrainian Art (today – the National Art Museum of Ukraine) got its own Special Secret Fund in 1937-1939. It included the works from Kyiv, Kharkiv, Odesa, and Poltava. The inventory book is dotted with labels such as “formalism,” “enemy of the people,” and “defacement of the Soviet reality.” Even the innocent fairytale-like work of Tymko Boychuk, Mykhaylo Boychuk’s brother – “Beside the Apple Tree” was determined to be “defacing reality.” 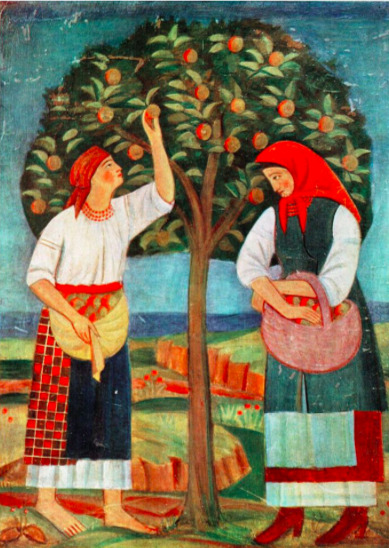 The fight against the “wrong art” lost its significance at the start of WWII, only to regain it in the first years of peace. The newly-annexed West of Ukraine took the brunt of the damage from operations aimed at exterminating “nationalist and formalist elements.” In 1952, the special fund of the Lviv National Museum was eliminated – it contained more than 700 works of Ukrainian artists, including those of Mykhaylo Boychuk.

The unconventional decision of its employees saved a special fund at the National Art Museum of Ukraine: they’ve re-listed the “special” works as ones of low museum value. Such depreciated “non-art” wasn’t subjected to department checks, which allowed the survival of some of the works of Boychukists and other members of the Ukrainian avant-garde. They were saved but hidden and out of sight for more than thirty years.

These works deemed “inadequate” for Soviet citizens were stored in these “special funds” in museums across the Soviet Union, including the Tretyakov Gallery in Moscow and the Hermitage in Leningrad. Stalin’s death in 1953 marked the end of the full-fledged suppression of avant-garde art in the USSR, but surprisingly, the works of Ukrainian and Russian artists fared differently.

New picture shows were opened, new art magazines were printed, and the general public were again able to view the works of avant-gardists. The artists of the new generation started using some not too radical avant-garde forms in their works – this marked the dawn of the Soviet Severe Style. Paris in 1979 and Moscow in 1981 have proudly hosted the sister picture shows dubbed “Paris-Moscow” and “Moscow-Paris.” They have introduced avant-garde art to the everyday Muscovite and paved the way for the triumphal walk of “Russian avant-gardism” over the countries of the West. The works of Kazimir Malevich and Aleksandra Ekster, both Kyivans, starred in each show, along with the art of Kharkiv’s native Volodymyr Tatlin. All three of them were not only appropriated by the Soviets but, more importantly, presented as Russian artists.

Ukrainian avant-garde art remained concealed and forgotten through all this time. Young artists who craved venturing beyond the narrow borders of socialist realism couldn’t turn to their national tradition, for they had none left. Instead, they had to look at their colleagues from Moscow and Leningrad. The executions of artists and destruction of their works, concealment of the masterpieces that didn’t fit into the socialist agenda, drainage of everyone young and promising into Moscow, and centuries of appropriation of Ukrainian artists by Russia – all this has resulted in a perception of Ukrainian culture as secondhand and backwater, only interesting for its naivety. Ukrainian artists and intellectuals themselves often shared these views – that’s why it was so vital for them to break out of their boring province into glorious Moscow and stand beside the so very deep and talented “Russian” artists.

Yet, despite all that – there were others, like painter and human rights advocate from Kyiv, Alla Horska (1929 – 1970). Like the Boychukists in their time, she created monumental compositions based on Ukrainian folk art. And like the Boychukists’ art, her works were deemed dangerous for being “too Ukrainian.” For instance, her stained-glass artwork “Shevchenko. Mother,” co-created with her like-minded colleagues for the Shevchenko University, was destroyed by the university’s administration for being “ideologically antagonistic.”

The significant difference between Alla Horska and Boychukists is that the latter opposed the regime only in the minds of their executioners, while Alla, with other Sixtiers, truly fought against the Soviets. Alla Horska supported Ukrainian dissidents and political prisoners, revealed the location of mass graves of those who were violently repressed in Bykivnya, and promoted Ukrainian culture wherever possible. That’s why in 1970, she was finally killed by order of the KGB.

At the beginning of 2014, most of the surviving mosaics, created under the guidance of Alla Horska, were in Donetsk. Their fate after the occupation remains unknown. Two more mosaics, “Tree of Life” and “Boryviter,” hung at the “Ukraine” restaurant in Mariupol. The chances of their survival through the shelling and bombardment are slim to none. 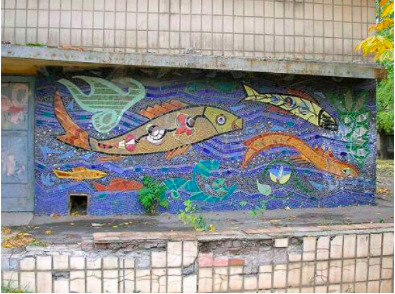 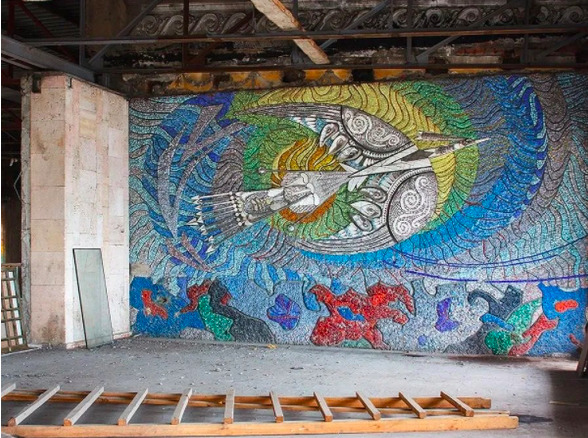 After surviving centuries of repression, concealment, and elimination, Ukrainian art history gives us great examples of vitality and fortitude. After the de-occupation of the towns near Kyiv, a lone cupboard that remained intact, hanging on the wall of a ruined building in Borodyanka, became the symbol of Ukrainian perseverance. On top of the cupboard sat a ceramic rooster which, as it was quickly discovered, was made in the Vasylkiv Majolica Plant. That’s where many of the Boychukists worked in their time, particularly Prokip Bidasyuk, Vasyl Sedliar’s student, who was an adept sculptor at the famous Mezhyhirya ceramics school founded by Boychukists. The chance of this is almost too unlikely to be pure coincidence.

Mykhaylo Bulgakov, a famous Russified Ukrainian, once said that manuscripts do not burn. Unfortunately, they do, but despite this, the spirit of Ukrainian art will live on regardless of Russians’ pitiful urge to destroy its physical manifestations.