Semantic Corpus|Humanitarian|Ukraine: most people refuse to compromise on territory, but willingness to make peace depends on their war experiences – new survey
Humanitarian

Ukraine: most people refuse to compromise on territory, but willingness to make peace depends on their war experiences – new survey

The war in Ukraine shows no signs of ending soon. Ukraine is suffering between 600 and 1,000 casualties a day. A fifth of Ukraine is now controlled by Russia and its proxies.

Wars generate well-known “rally-around-the-flag” effects in public opinion – though the nature and sincerity of this is disputed. This leads us to expect that Ukrainian public attitudes towards any perceived compromises – especially territorial concessions – would be hardening.

The latest survey research in Ukraine largely confirms this. But our work adds crucial detail and nuance: those most affected by the war through displacement, and thus most concerned about their immediate security and welfare, are most likely to support an immediate ceasefire. Regional and gender differences are also pronounced.

Not all contested territory is the same

Russia’s invasion of Ukraine in February 2022 was not its first invasion. Russian forces seized Crimea in February 2014 and supervised a flawed local referendum that justified Russia’s annexation of the peninsula. In the Donbas, Russian forces helped pro-Russian militias carve out breakaway territories. Prior to the recent invasion the Russian president, Vladimir Putin, recognised these de facto states and their claim to the whole Donbas region.

Russian forces have suffered significant setbacks, but currently occupy large swaths of Ukraine’s south coast and much more of the Donbas than before. Reports suggest plans to hold a referendum there and to potentially consolidate all Russian occupied territory outside Crimea into a single political unit.

Between May 19 and 24, we commissioned questions in the nationally representative Omnibus survey of Ukrainians by the Kyiv International Institute of Sociology (KIIS). Researchers posed a binary question about possibly conceding territory for peace in which 82% agreed with the statement that: “Under no circumstances should Ukraine relinquish any of its territories, even if this prolongs the war and threatens its independence.”

Given that the contested territories are different (as described above), does naming specific territorial concessions, or wartime experiences, make a difference? To do so, we probed attitudes to four territorial compromise scenarios.

Our question read: “All choices about what to do during this current Russian aggression have significant, but different, costs. Knowing this, which of the following four choices should the Ukraine government take at this time?”

The options and respective national percentages were:

These ratios of support for various territorial compromises show more nuance within the Ukrainian population than the usual black or white, all or nothing options that dominate political discourse. Existing research suggests we should expect that some people will not speak truthfully in phone survey interviews when patriotic feelings are high.

The survey shows marked regional differences. Respondents in the areas hardest hit by the fighting (south and east) were more likely to choose immediate ceasefire and negotiations and less likely to favour other options than those in the rest of the country. The ratios on the choice of fighting until liberation of all Russian-occupied territories were markedly different: in the west of the country, 65% wanted to keep fighting compared to only 45% in the east. 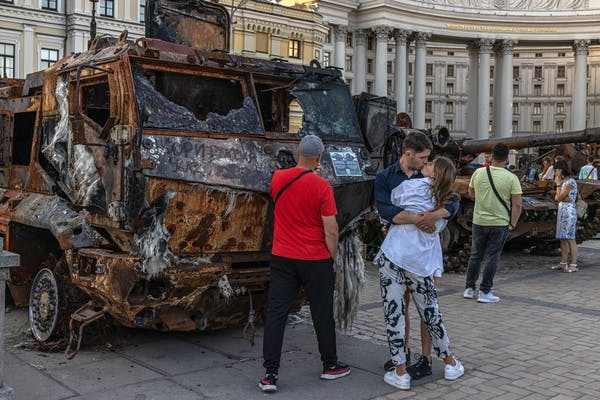 People in central and western areas of Ukraine feel a great deal safer and this is reflected in their attitudes to a peace settlement. EPA-EFE/Roman Pilipey

The biggest differences in attitudes, though, are related to the sense of (in)security and future welfare that families will have as a result of the war. We asked respondents the question: “How secure do you feel about your own and your family’s welfare (such as safety, housing, food, income etc) in the immediate future (that is, over the next 6 months)?”.

We asked them to rate their situation on a “very secure” to “very insecure” scale. The graph below shows the distribution of the territorial compromise option according to the family security and welfare self-rating.

The nationally-representative poll of 2009 respondents was conducted via CATI (computer assisted telephone interviewing) of people currently resident in Ukraine but did not cover the regions currently occupied by Russian forces. Survey questions designed by the authors, Author provided

Respondents who feel most secure about their family’s future are significantly more willing to fight on until all of Ukraine is retaken (about 75%) than those who feel the least secure (about 46%). We see the reverse trend when it comes to acceptance of ceasefire and negotiations.

Examining the backgrounds of families who rate themselves as insecure shows that they are much more likely to have moved as a result of the conflict (29%) and to live mostly in the east and south of the country. Respondents who feel more secure about their family’s welfare and security in the immediate future are predominantly in the centre and west and only 6% of them report having moved since the start of the current conflict.

Although we are not directly assessing the correlation between experiences of violence and views on negotiations and territorial compromises, these findings speak to ongoing debates about the effects of wartime violence. Violence and the trauma and insecurity it generates can harden attitudes towards compromise. But it’s also plausible that those experiences can make people more likely to favour initiatives that bring an end to the fighting.

The Russian invasion of Ukraine has become a protracted war. Right now, a majority of Ukrainians tell pollsters calling their mobile phones that they do not wish to relinquish territory for peace. But a distinctive minority of Ukrainians, those most affected by the war, hold a different view.