Semantic Corpus|Economy|Ukraine is a global IT hub: Business conditions are great to the extent that the country doesn’t gain benefit
Economy

Ukraine is a global IT hub: Business conditions are great to the extent that the country doesn’t gain benefit

Today, Ukraine is one of the largest exporters of IT services in Europe. In the past few years, the Ukrainian IT industry has developed rapidly and now employs over 300,000 people. Here’s a deep dive into the factors for the country’s IT industry going global, its influence on the economy, and how Ukrainian IT works during the war with Russia. 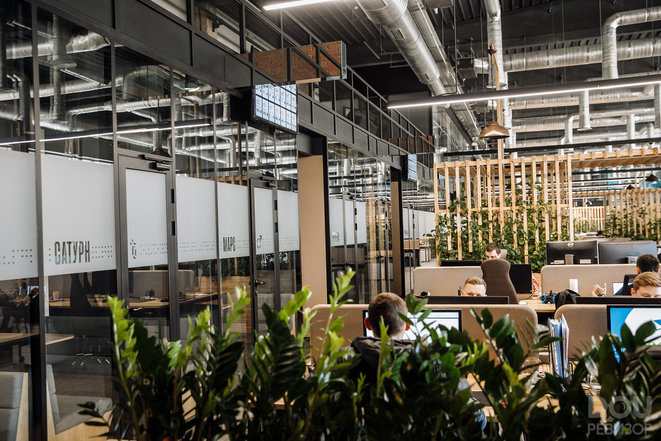 In 2021, Ukrainian IT industry grew by 36% to USD $6.8 billion, topping the ranking of Ukraine’s service exporting industries. According to the IT Ukraine Association report, the industry generated more than 4% of Ukraine’s GDP.

Diomid Treumov, CEO of IST company in Poltava, shares: “We started in 2008, and for eight years, most of our clients were based in Ukraine. Since 2016, more markets have been open for us, and we’ve gradually started to work with foreign clients from the US, Germany, the Netherlands, Sweden, Switzerland. The cost of our services is not affordable for the majority of businesses in Ukraine, so only long-term established clients stayed with us”.

According to him, the demand for Ukrainian IT services abroad started growing in 2014-2015.

“We’ve seen a shortage of workers abroad in our industry, and foreign countries started considering Eastern Europe, not only India,” says Mr.Treumov. He continues: “Ukrainians provide a competitive level of IT developments, which hit the sweet spot in price and quality. Besides, for Europe, Ukraine is culturally closer than, say, India or the Philippines. European businesses enjoy cooperating with us.”

In addition, both Europe and the United States benefit from contracting with Ukrainian IT companies.

“The firing process is complicated if, for example, a company hires a person for a full-time job in Germany. Social benefits, taxes, medical insurance—all those costs add up. Contracting a Ukrainian firm means the service price is almost the same, but the cooperation concludes when the contract is fulfilled. No need to negotiate the employment termination or to pay compensation”, the CEO concludes.

Companies like Digicode, Infopulse, Innovecs, SoftServe are leading the IT industry in Ukraine, and the list goes on. These companies specialize in software development and support, video games, cloud and online services (SaaS, etc.), software literacy and programming training, testing and technical support of software, e-sports, activities related to the circulation of virtual assets, cybersecurity, development, and implementation of robotics, etc.

The birthplace of Ukrainian IT talents

Ukrainian specialists are known for their qualifications, and foreign companies gladly cooperate with them.

Most of the Ukrainian employees hold higher education diplomas, and 80% are intermediate or advanced English speakers.

Ukraine has a well-developed network of higher education institutions that train IT, specialists. The most influential educational institutions form clusters in their regions. Thus, the most significant number of graduates is concentrated in large cities such as Kyiv, Kharkiv, Lviv, Odesa, Dnipro, and others.

At the same time, the IT businesses in Ukraine need skilled workers, so companies also invest in education and training. Due to this, modern educational platforms appear, and the number of graduates of IT specialties is growing rapidly.

Some companies have developed training programs that help people in other fields get IT education and employment opportunities.

In Ukraine, the idea that the IT industry is not for women has prevailed for a long time. Only men were believed to be capable of the job. Despite this belief, the situation is gradually changing. More girls become developers, slowly erasing the gender stereotypes in the industry.

Lyuba Shipovych’s career is a striking example. Lyuba is a volunteer who started as a software engineer growing to a technical director at American companies. She worked as a freelance adviser to former Prime Minister of Ukraine Oleksiy Honcharuk and is now vice president of the Ukrainian-American organization Razom. When Ukraine’s Cabinet of Ministers envisioned the country’s digitalization and started implementing a plan to create a favorable IT ecosystem in Ukraine, Lyuba consulted the government representatives.

“It’s a matter of a person’s skills, not gender. Some people are more familiar with design techniques, and others are better at design visualization. Gender doesn’t matter.

Everything depends on your interests”, shares Oleksandra Kolotuhina, who once made a career shift from manager to a programmer. She continues: “Anyway, the gender imbalance in the industry is obvious, but it’s not because women can’t do the job. It all depends on the person’s interests”.

Diomid Treumov, on the other hand, says 70% of employees in his company are women. However, women mostly choose web design, while male colleagues opt for programming.

IT services are an important part of Ukraine’s economy, and a large labor market with no shortage of IT major graduates is among the country’s advantages in the global market.

The number of IT companies in Ukraine is growing exponentially every year. The reason is simple – favorable business conditions. Diomid Treumov elaborates: “Opening an office abroad, in Germany, for instance, is a utopia for us. The exorbitant nearly 50% taxes are not worth it. For IT workers, Ukraine is like a pirate ship, in a good sense. You only pay 5% tax because IT industry development is a priority, and the government created a favorable environment. You’d have a hard time finding a lower tax rate. I’d say that the conditions for IT businesses are so good, the country itself almost doesn’t  benefit. The paradox is that low tax rate combined with high salary level drives a specialists imbalance on the labor market, since everyone shifts to IT”.

IST CEO also notes that Ukrainian IT workers don’t aim to emigrate. Why would they, when everything from real estate rental and purchase prices to transportation is expensive abroad, while the high salary allows them to live comfortably at home?

Right before the war erupted, Ukraine officially launched a special legal program for the IT industry – “Diia City.” Authorities hoped that the share of IT in the country’s GDP would increase from 4 to 10%, and the industry’s revenues would reach $16.5 billion.

During the presentation of this initiative, Ukrainian president Volodymyr Zelensky noted that he wanted Ukraine to become a global IT hub.

According to him, it is necessary not only for talented Ukrainians to stay at home but also to attract specialists from all over the world to Ukraine.

“We want Ukrainian companies and foreign IT companies to join Diia City. From what I know, both leading home-grown and foreign companies will join today”, the president shared.

Diomid Treumov is convinced: “The demand for our IT experts is largely the result of the “Ukrainian startups revolution.” Successful projects are the best proof. The number of startups is growing, and mostly, it’s collaboration projects with foreign experts”.

Outstaffing and outsourcing are the two main cooperation modes for foreign clients and Ukrainian IT firms.

Outstaffing means that the employee is trained and then sent to another company. For example, a foreign company hires a person full-time, and the payment for the work is transferred to the company in Ukraine, which in turn settles with its specialist.

Outsourcing, on the other hand, means the Ukrainian company receives the project or part of it and develops it independently.

Ukrainian programmers have worked on many startups that are actively used abroad. Here are just a few examples.

AllSet— software for F&B companies that allows users to preorder at restaurants, book a table, pay the bill in advance and leave tips.

Scanner Pro— an app that turns any iPhone into a scanner and any photographed document— into a high-quality PDF document. Seven million users across 150 countries have already appreciated the app. It was named “App of the week” on Apple Store. Meanwhile, developer company Readdle never received any investment despite the international success and has no plans to leave Odessa.

Grammarly— an English grammar checking service used by 30 million people globally. The company’s offices are in Kyiv and California, and it has recently increased its valuation to $13 billion. Some say that this paid service’s annual revenue reaches  $70 million.

Depositphotos— another Ukrainian startup success story. Established in 2009 by entrepreneur Dmytro Sergeev, this service offers royalty-free stock images, graphics, vectors, and high-resolution videos. At one time, Depositphotos was considered one of the fastest-growing photo banks in the world. Now Depositphotos library has over 200 million files.

The COVID-19 pandemic has dramatically changed our lives. Millions of people across the globe have moved out of the office and started working from home. Under these circumstances, attention to blockchain technologies and metaverse grows. It’s not hard to predict that most advertising, products, and services will migrate to the digital world.

Skilled IT workers shortages grow alongside fast-developing technologies, which means the competition to hire the best IT talent will only worsen. As a result, IT companies are starting to look for talent worldwide. Over 20 countries, including Australia, Germany, Portugal, and the United Kingdom, have introduced startup visas to attract entrepreneurs over the past ten years. We understand that the hunt for talent is on.

The Ukrainian IT industry is looking good in this context. The country is home to a large market of IT companies and developers with growth potential.

A strong Ukrainian IT school and many years of engineering traditions contribute to this.

The country boasts several innovation centers like UnitCity in Kyiv and Kharkiv, Lviv, Tech City. These centers provide infrastructure for tech companies and attract IT talent to one place, creating a space for co-working, exchange of ideas and knowledge.

In addition, many well-known startups have been created in collaboration between Ukrainian developers teams and European experts.

Geographical location is also another reason a company in Europe might prefer to work with Ukrainian IT teams. The time difference between Europe and the United States is about 8 hours, while with Ukraine, it is only 1-2 hours, allowing the customer to communicate with the contractor more productively.

Ukraine has the power to develop its ecosystem and compete in the global market. Unfortunately, many plans were thwarted by the war with Russia. However, the state program “Dii City” and the low tax rates for the IT industry show that Ukraine intends to strengthen its own ecosystem, grow talents, and further increase the country’s attractiveness for cooperation.

Work during the war

Since the beginning of Russia’s invasion, the labor market in the Ukrainian IT industry has fallen by 50%. Compared to pre-war time, the number of employed workers nearly halved. Experts predict that the market will recover in the coming weeks despite grim statistics.

Diomid Treumov shares that part of the IST team continues to work in Poltava, others— moved to the Zakarpattia region. According to the CEO, the amount of projects didn’t decrease.

“Girls stayed; some of the guys joined the war front. Sure, the war impacts the business, but what can you do? The problem is not a lack of projects; the problem is that it’s hard to plan or predict anything. Say, we’ll sign a contract on a new project, and tomorrow two of our programmers will be taken to the army. We won’t be able to fulfill the contract, and that’s the main point. There’s no lack of orders, as long as you can guarantee the contract fulfillment. During the war, we’re not in the position to promise such guarantees,” Diomid Treumov said. “I believe people who choose to stay in Ukraine should work. It helps to attract investment and pay taxes. What happens if everyone leaves? The country will go broke”.