Semantic Corpus|Humanitarian|“There is a war against humanity”: international online forums on the occasion of the European Council summit took place in Kyiv
Humanitarian

“There is a war against humanity”: international online forums on the occasion of the European Council summit took place in Kyiv

On the eve of the European Union’s consideration of Ukraine’s application for membership, large forums were organized in Kyiv on 18 and 19 June with the participation of world-renowned professionals, intellectuals, activists, and government officials. The events were held in order to strengthen the strategic communications of Ukrainian narratives and to draw attention to important topics for our country and Europe. 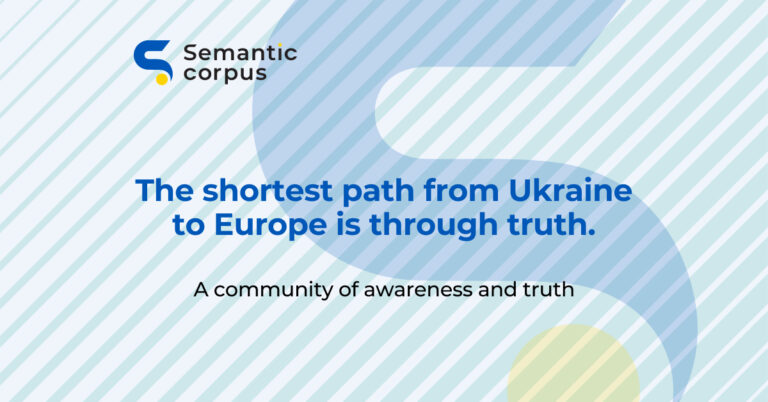 The first forum “Church. State. Society” was devoted to the issues of the integrity of Christian values ​​in the conditions of the Russian-Ukrainian war and the transformation of the church of the aggressor country into an instrument of bloody propaganda. The guests of the information panels of the event were interfaith and international: speakers Ihor Kozlovskyi, Yurii Chornomorets, Father Andrii Pinchuk, Viacheslav Horshkov, Murat Suleimanov, Jose Casanova, Father Andrii Mykhaleiko, Olena Bohdan, Viktor Yelenskyi, Kateryna Shchotkina, Oleksandr Filonenko, Myroslav Marynovych, Helen Zorgdrager, Roman Kechur, and Bernard-Henri Levy raised the issues of faith during the war, the unification of church and state in the service of society and the main “pillars” on which society will rely after victory. Moderators of the forum were Heorhii Kovalenko, Oleg Turii, Taras Liutyi.

“Since 1996, Ukraine has developed a unique model of religious pluralism. It broke with the European model of the national church. The Joint Congress consists of 15 different religious associations, and the president of this organization is elected every 6 months. This is a unique experience that has no analogues in the world… The fact that various Ukrainian religious organizations are ready to work for the common good is a sign of positive change for Ukraine.”

“The soul is reborn and filled with light only when you do good. Who can we save with our light? It gives us the strength to feel that we are on the right side of history. We are fighting darkness and we want to be on the side of light.”

“… The Vatican and I also look at the events in Ukraine differently. There is the cross of the victim and the cross of the perpetrator, so the Pope should have been informed that we accept the Vatican’s message with some pain. The Pope clearly understands who the aggressor is, but he is not looking for a political, but a Christian answer to our current situation.”

“I was on the Maidan. I have already said how important Ukraine is for the fate of the whole of Europe. I was in Donbas in 2014. I made a film about the resilience and courage of ordinary Ukrainians. You are on guard of Europe, your war is our war, your defeat is our defeat. You can’t lose the war because the rest of Europe is with you. “

“I am full of admiration and respect for you. Today, more and more people in Europe believe that the capital of Europe is Kyiv, or Odesa, or Mariupol. You embody the values ​​of Europe. Belief in democracy, courage … You are the basis of these values ​​today. I think this idea is widespread in Europe. Your war is our war.”

The next forum, “Unnatural War: Russia’s Environmental Terror,” addressed the consequences of Russia’s military aggression for the Ukrainian environment and for the ecology of the entire region. The period studied by specialists since the beginning of the war was starting from 2014 – the occupation of Crimea and the Eastern regions of Ukraine. In addition to overcoming environmental, radiological, and chemical threats, this forum was marked by a presentation panel “Eco Talk”, which was open to all interested industry experts. Among the speakers were Tetyana Tymochko, Viktor Komorin, Kostiantyn Yalovyi, Vasyl Cherlynka, Ihor Hopchak, Olena Pareniuk, Yurii Khaliavka, Lembit Sihver, Mike Wood, Denys Vyshnevskyi, Serhiy Paskevych, Yevhen Dykyi, Maryna Ratushna, Oleksii Vasyliuk, Olena Masliukivska, Oleh Savytskyi. Moderators of the forum were Lala Tarapakina, Kateryna Shavanova, Denys Bloshchynskyi.

“Chornobyl is a sacred place for radiation safety. Nobody thought that someone could seize such territory by terrorists… What to do with the exclusion zone? Make Chornobyl an international research center. It can become a place of new opportunities. This is a unique case, and we cannot overlook it.”

“Ukraine must become a growth point. Ukraine can become a unique learning space that can be attractive to international experts, particularly in the field of nuclear research.”

Mike Wood (British scientist, professor at the Center for Ecosystem and Environmental Studies, international expert on Chornobyl and the Exclusion Zone):

“Working with Ukrainian scientists helps us understand how radiation affects nature. This is fundamentally important for the whole world. We must continue this cooperation. We need to find ways to keep doing it.”

Forums “Church. State. Society” and “Unnatural War: Russia’s Environmental Terror” are part of a series of projects and activities brought together in a single global dialogue platform on social media under the single hashtag #WINWIN_UAEU.

The Foundation for Social Innovations “From Country to Ukraine” is an initiative that takes care of the social evolution of Ukrainians and a developed civil society through social innovations in education and culture.

Semantic Corpus is a public volunteer initiative whose main mission is to develop cooperation between Ukraine and the EU on the basis of subjectivity, mutual respect, and interdependence through the tools of strategic communications.

Denys Bloshchynskyi (Head of the Board of the Social Innovation Foundation “From Country to Ukraine”, Ukrainian musician, entrepreneur, expert on systemic transformation projects):

“When we came up with a number of events in the format of a special project “European dimension: a game with a positive amount” a special place among the activities was occupied by these two forums. After all, what could be more important than the balance between a person’s inner world and the world in which that person exists? The war hit both worlds hard. Sometimes it is difficult to understand where the holes in roads and poisoned soils end and the holes in souls and burnt hearts begin. We had a great challenge – to rethink, to live, and receive another victory after a great victory in this war – victory over the consequences…

Both civil society and academics and representatives of the Ukrainian government understand the importance of this victory. We saw this on the forum. The Office of the Deputy Prime Minister for European and Euro-Atlantic Integration, the Ministry of Culture and Information Policy, the State Service of Ukraine for Ethnopolitics and Freedom of Conscience, the Ministry of Environment and Natural Resources, dozens of NGOs and scientists – all of them made every effort in order to discussion these important issues continues. Today, Ukraine is more united in its desire for change than ever before.”

Media partners of the events: