Semantic Corpus|Humanitarian|The World Will Never Be the Same, or Cruelty With No Limits
Humanitarian

The World Will Never Be the Same, or Cruelty With No Limits

At five o’clock in the morning on February 24, 2022, Russia, in flagrant violation of international law, launched a full-scale military invasion of Ukraine. Justifying its insolence with absolutely made-up reasons, the army of the Russian Federation launched a simultaneous offensive from the air, sea, and land. Missile strikes were carried out on all the important sites of the Ukrainian military-defense complex in various regions of the country. Ukraine awoke in flames, but this was only the beginning of the most brutal war in the history of the 21st century. 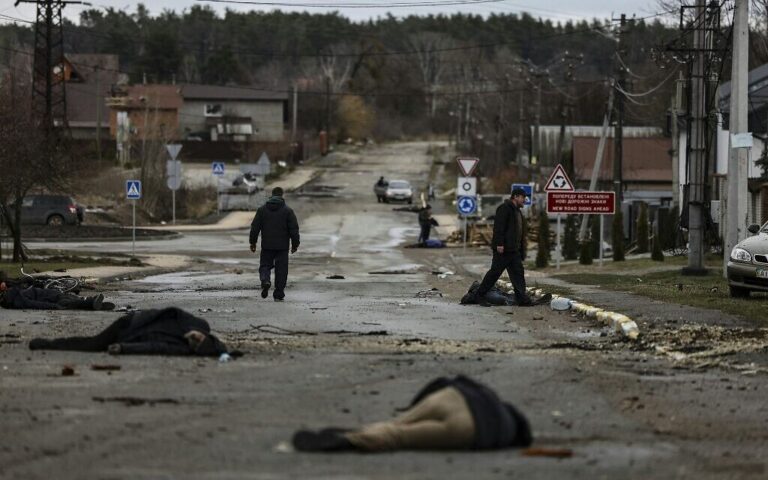 Russia’s invasion of Ukraine began with the occupation of the Crimean Peninsula in February 2014. In April of the same year, the Russian army appeared on the mainland of Ukraine when troops without identifying symbols entered the Donetsk and Luhansk regions in support of terrorist groups led by the Federal Security Service of the Russian Federation (FSB RF). Consequently, the war in Ukraine has been going on for eight years. However, only now has the whole world seen how cruel and inhuman the face of Russia can be.

Contrary to Putin’s claims of a “military operation” aimed exclusively at the Ukrainian troops, it is no longer possible to conceal his army’s crimes against civilians. Currently, virtually all regions of Ukraine are subjected to aerial bombardment, and infrastructure and civilian facilities suffer. Fighting is taking place in the East, North, and South of Ukraine, killing thousands of civilians, and occupied cities are experiencing a humanitarian catastrophe and atrocities the world has not witnessed since World War II.

Ukraine is defending itself, causing admiration all over the world. Ukraine’s defenders tore off the mask from the “second world army”, revealing its true face: cruel, cynical, and drunk. A war in which the whole civilized world is united against barbarism, against cruelty, against inhuman cynicism… The Kremlin leader’s ambitious plans for a blitzkrieg failed. Unable to even feed his soldiers, Putin ordered all units to move to self-sufficiency, thus giving the green light to looting, which was already in full swing in the occupied territories. The Russian army has been stealing from equipment and food from grocery stores, and reports have also flooded in about the looting of civilians’ apartments and houses. According to bbc.com, the Human Rights Watch presented evidence of crimes committed by the Russian army against civilians in the temporarily occupied Chernihiv, Kharkiv, and Kyiv regions of Ukraine. These crimes include rape, executions, and other acts of violence and terrorization of civilians between 27 February and 14 March 2022. Those responsible for these actions are war criminals, said the Human Rights Watch report.

News of brutal killings, rapes, and looting in the temporarily occupied territories began to surface in the first weeks of hostilities. However, when the Ukrainian army finally drove the occupying forces out of the Kyiv region, the whole world shuddered at what it saw. Bucha, Irpin, Hostomel, Velyka Dymerka, Peremoha, Kharkiv, Mariupol, Chernihiv – and this is not a complete list of settlements that have suffered atrocities by the Russian military.

Bombed-out kindergartens and schools, hospitals, churches, destroyed roads and bridges, entire streets burned and destroyed – this is something that cannot be seen without pain and tears. But when you see the real facts of thousands of civilians killed, it just takes your breath away in despair and anger. Men were shot in the back of the head with their hands tied behind their backs, women were killed in their backyards for daring to come out of their basements, children were crushed by tanks, or killed by the occupiers’ machine guns. Ukrainians were tortured, killed, raped, but not broken. It’s scary to even imagine what they had to go through in less than five weeks of war.

In his report from Bucha, BBC journalist Joel Gunter tells of details that make the blood run cold:

“Russian troops had smashed through the front gates of Volodymyr’s home, opened fire at the house, and dragged Volodymyr, 72, his daughter Iryna, 48, and her husband Oleg, 40, out into the yard.

The soldiers took Oleg out beyond the gate on to the pavement, Volodymyr said, and threw a grenade in through the front door of the house that exploded with a deafening bang and set the house on fire.

Volodymyr grabbed a small fire extinguisher and tried in vain to extinguish the flames. ‘Where is Oleg? Oleg will help!’ he shouted to his daughter.

But the reply came from one of the Russian soldiers, he said.

‘Oleg will not help you any more.’

They found Oleg on the pavement outside the gate, and it was clear from the way he was lying that he had been forced to kneel and shot in the head at point blank range, Iryna said. He was a welder who lived a quiet life on the corner of Yablonska Street in Bucha, who was taken out of his home and killed.” – and that is just one of the thousands of stories.

“Rape is a weapon of war. Though we do not yet know the full extent of its use in Ukraine, it is already clear that it was part of [Russia’s] arsenal. Women raped in front of their children, girls in front of their families, as a deliberate act of subjugation. Rape is a war crime,” said the ambassador of the United Kingdom in Ukraine Melinda Simmons.

The facts that have been revealed to the world are horrifying. The most painful issue is, of course, children. As of April 5, 165 children have been confirmed dead in the country, according to the Verkhovna Rada Commissioner for Human Rights Liudmyla Denisova. But the actual number of dead and wounded children is currently impossible to establish due to ongoing military actions in many Ukrainian cities. The callous bombing of the Mariupol Drama Theater caused a wave of outrage around the world. The theater’s bomb shelter housed about a thousand people, most of them were children, women, and elderly people, and on both sides, there was an inscription in Russian “CHILDREN” that could be easily seen from the air.

There was no less discussion in the world about the bombing of the maternity hospital and children’s hospital in Mariupol. A photo of a wounded pregnant woman went viral, and later it became known that she died with her unborn child. A total of 17 people were injured at that time, three died, including a child.

If the above facts can still be attributed to methods of intimidation, attempts to subdue through humiliation, and an attempt to force the Ukrainian authorities to capitulate, then cruelty to animals cannot be explained by anything. We see horrific footage of slaughtered animals on the streets of occupied settlements, including dogs, cattle, and horses. In Hostomel, a stable was burned by the occupiers along with 32 horses. Only a few animals managed to escape from the fiery hell.

Animals of the XII Month Zoo in the suburbs of Kyiv suffered from the occupation as well. During the entire occupation, the Russian military did not allow the zoo staff to feed and water the animals. On April 5, Oleksandr Feldman, owner of the Feldman Ecopark near Kharkiv, said that as a result of airstrikes the day before, the park had been destroyed. Enclosures with tigers and lions were damaged, as well as a building with bears, and many animals died.

As of April 4, the General Public Prosecutor’s office of Ukraine had registered 4,204 war crimes and initiated criminal proceedings. European countries and the United States are ready to provide their specialists to record and investigate crimes committed by the Russian army in Ukraine so that the perpetrators will be punished. However, the war is still on-going and the number of children killed is growing every day, women continue to be raped, civilian infrastructure and property are being destroyed, and entire areas are being wiped out.

These crimes look especially cruel considering the approaching anniversary of the end of World War II. Eighty years later, the evil of a fascist regime has returned to Europe in the form of Putin, who is trying to impose his ideology on the world with the bloody hands of the Russian army. For many years, the celebration of Victory Day in Russia has been accompanied by the slogan “We can repeat.” What they mean is accessing Berlin by tank and redrawing Europe’s borders. Now, Ukraine is almost alone in stopping the advance of this death machine. If its independence collapses, the reality of ruined cities, murdered children, and raped women will knock on the door of every European.