The future of global security will be decided in Ukraine 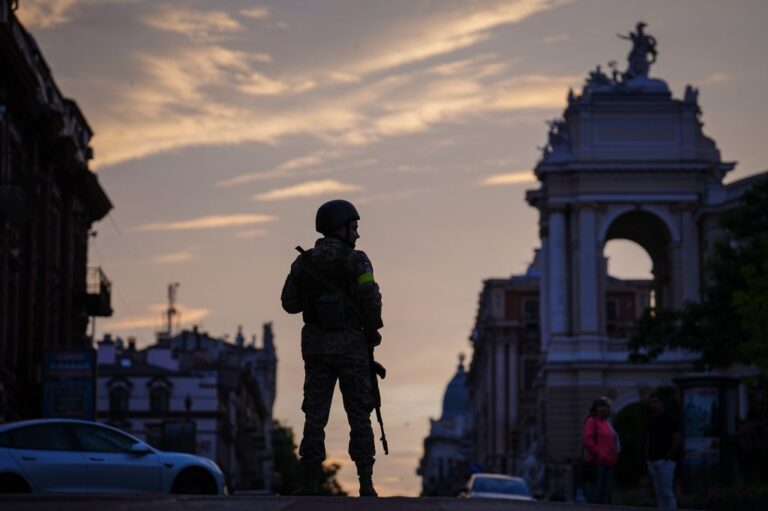 NATO leaders will gather in the Spanish capital at the end of June for a potentially historic summit. They are expected to approve a landmark new Strategic Concept at a time when the Russian invasion of Ukraine has created the most dramatic international security challenges for a generation. The choices made in Madrid will likely shape the geopolitical agenda for decades to come.

The impact of the war is not restricted to the European continent alone. Russia also blackmails the world with the possibility of global hunger and energy shortages. Kremlin officials openly intimidate the international community with threats of nuclear escalation.

This is a time for NATO to lead. The alliance’s highly anticipated Strategic Concept will serve as a roadmap for the future of the free world. It will be the first major document of its kind to be officially adopted since the Kremlin’s invasion of Ukraine shattered the international security system which had been established in the aftermath of WWII.

Other key international institutions have already been found wanting. The Russian rocket attack on Kyiv in April while UN Secretary-General António Guterres visited the city was intended as a show of open contempt for the United Nations. Clearly, the UN Security Council is incapable of upholding peace as long as one of its permanent members retains veto power while committing genocide in Ukraine. The OSCE has suffered a similarly grave loss of legitimacy since the outbreak of hostilities on February 24. Unless these institutions undergo radical reform, they will disappear.

With the international security system in crisis, NATO’s new Strategic Concept will acquire a status and symbolism that far exceeds earlier expectations. It will provide a vision for the future of international relations. If this vision is defined by inertia and empty expressions of concern, it will signal that the free world is no longer able to stand up to international aggression. This would be interpreted by authoritarian regimes as an open invitation to act with impunity. If the Strategic Concept demonstrates genuine leadership, this will send an altogether different message.

It is crucial to recognize that today’s authoritarian regimes depend on the inertia of the international community. Autocracies are able to act faster than democracies and much faster than international alliances. This enables them to establish facts on the ground before others are able to react. The negotiations that then follow are typically in the aggressor’s interests and to the detriment of the victim. Ukraine, Georgia and Moldova have all experienced this to their cost.

The democratic world urgently needs to regain the initiative. For far too long, Western leaders have allowed authoritarians like Putin to set the international agenda and make the first move while they remain reactive.

Ukrainians can confirm that this is the wrong approach. The international community is currently debating exactly the kinds of sanctions that Ukrainian officials were calling for more than a year ago when Russia first massed troops along the Ukrainian border and threatened a full-scale invasion. Instead of sanctions, the Western response in spring 2021 was to reward Putin with more dialogue.

Similarly, every current conversation with our international partners focuses on how to defend Ukraine’s skies with enhanced aviation and missile defense systems, but this is nothing new. I recall addressing the need for Western air defense systems back in August 2021 while in the US. Nor was I the first Ukrainian official to do so.

President Zelenskyy then enjoyed a successful White House meeting with President Biden, which saw the adoption of a framework document lending new meaning to our defense partnership. Nevertheless, cooperation continued to lack of sense of urgency. Discussions dragged on for some months over the delivery of Stinger missiles, with authorization only coming as reports began to mount of an imminent Russian invasion.

Despite widespread warnings that Moscow was poised to invade, Ukraine received nothing but infantry weapons for close combat or guerilla warfare. Instead of tough Western sanctions that could have served to deter Russia, we were confronted with predictions that Kyiv would fall within three days.

We did not share this fatalism. While we had access to the same intelligence data as our partners, we were confident that our ongoing preparations would make it impossible to take Kyiv in three weeks, never mind three days. Military units were repositioned to mirror the deployment of the Russian and Belarusian armies. Aviation and air defense systems were moved. Supplies were gathered that would allow Kyiv to survive a three-month siege. Needless to say, such reserves were not accumulated overnight.

As we readied to defend our country, our partners continued to hesitate. At the Munich Security Conference just days before the war began, the Ukrainian delegation had a series of memorable conversations with our partners. If our colleagues were so certain of an imminent invasion, why were they not ready to impose deterrent measures? Again and again, we were told that this could lead to an escalation.

Efforts are now underway to persuade Ukraine of the need to enter into negotiations. These negotiations are not intended to establish the amount of Russian reparations or determine which Ukrainian city will host a future Russian war crimes tribunal. Instead, Ukrainians are being encouraged to negotiate how much of our land we should gift to Moscow in order to avoid “humiliating” Putin. Such thinking will not bring about a lasting peace. Quite the opposite, in fact.

Many observers describe the Western response to Russia’s invasion of Ukraine as inadequate. I personally believe the key problem is inertia. At every stage of the crisis, the West has handed the initiative to Russia and allowed Moscow to dictate the pace.

Will the new NATO Strategic Concept echo the inertia that has brought us to the current crisis, or will it demonstrate the kind of leadership that will allow the democratic world to reassert its authority? I remain fundamentally optimistic. After all, US Secretary of State Antony Blinken, Secretary of Defense Lloyd Austin III, Chairman of the Joint Chiefs of Staff General Mark Milley, and UK Secretary of State for Defense Ben Wallace are not just great friends of Ukraine; they are all also proof that leadership can still overcome inertia on the international stage. There are many more similarly inspirational leaders among our EU partners.

The challenges we face can only be overcome together. Ukraine is now looking for a clear signal from NATO regarding our future role in European security. During the past four months, Ukrainians have demonstrated conclusively that we can serve as Europe’s eastern shield.

The signal Ukraine expects must go beyond mere words of encouragement. We must develop a common strategy that looks forward and anticipates the practical security issues that lie ahead. For example, it is evident that Ukraine and NATO have a shared interest in defending our skies. Which planes should Ukrainian pilots train with? Should they be flying F-15 and F-16 jets, or perhaps they should immediately jump to the F-35? Could it be Gripens? The same dialogue is needed on everything from missile defense and tank units to naval forces and cyber security.

If NATO’s new Strategic Concept has no clear place in it for Ukraine, the document will be divorced from today’s security realities and dead on arrival. This would be a victory for inertia and a green light for dictators like Putin to pursue aggressive foreign policies. The entire world would become a far more dangerous place.

By the time the NATO summit gets underway in Spain, Russia’s full-scale invasion of Ukraine will have entered its fifth month. This invasion has already imposed staggering costs on the Ukrainian people and transformed the geopolitical landscape. By demonstrating strong leadership, NATO members can determine the outcome of the war and define the future of global security.

Oleksii Reznikov is the Ukrainian Minister of Defense.