Russia is swaying Twitter users outside the West to its side 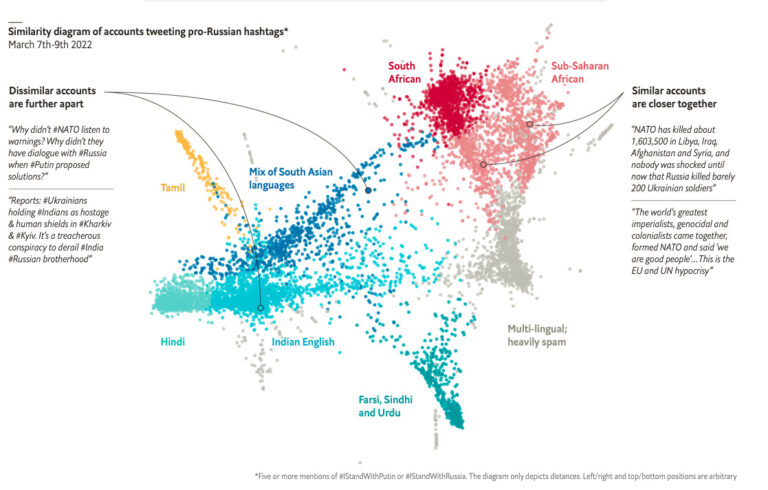 To Western ears, Russia’s portrayal of Ukraine’s leaders as Nazis sounds absurd. But just as Ukraine’s military strength surprised the Kremlin, the effectiveness of Russian propaganda might also be underestimated. An analysis of recent Twitter posts suggests that Russia’s online information operations may be focused outside the West—and already bearing fruit.

To measure the impact of Russia’s online influencers, we studied 7,756 Twitter accounts identified by casm Technology, a British analytics firm. All used the #IStandWithPutin or #IStandWithRussia hashtags at least five times in the war’s first 12 days.

casm has divided these accounts into clusters (see diagram above). Each dot represents one user. Accounts that sent similar messages appear close together, whereas those that behaved differently are far apart. For example, accounts in South Africa often emphasised anti-colonial solidarity, whereas many in South Asia focused on Russia’s diplomatic support for India.

Such groupings leave a key question unanswered. How many of these users genuinely back Russia, and how many are bots or paid trolls? To find out, we collected 3.7m tweets by these users and their followers, and produced versions in English using Google Translate. We then read 2,211 of these posts; classified them as supporting Russia, Ukraine or neither; and used these data to train an algorithm, which applied these labels to all remaining tweets.

Next, we tried to work out which users could be acting on behalf of the Kremlin. Nearly half of the accounts were no longer accessible, because they were deleted, made private or banned by Twitter. Of the remainder, an estimated 7% churned out pro-Russian tweets in a suspicious manner. Some were created early in the war; others rarely mentioned Russia before early March. Many acted in concert by posting identical messages. Unlike automated bots, most of these accounts varied the wording and emphasis of their content. This supports many analysts’ hunch that real people are being paid for such posts, either by Russia or by its proxies.

Because this activity is concentrated in Asian and African online networks, it is largely invisible to Western Twitterati. But if countries like South Africa help Russia weather the sanctions, #IStandWithPutin may be partly responsible.