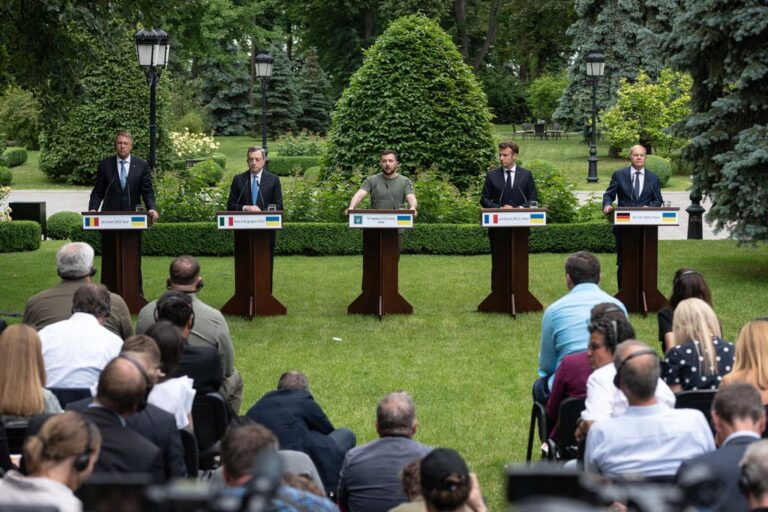 By proclaiming their support for Ukraine and Moldova becoming official candidates for EU membership, the leaders of France, Germany and Italy on Thursday sent an unequivocal message to Vladimir Putin: the Soviet sphere of influence is dead — and it will not be resurrected by force.

The leaders — French President Emmanuel Macron, German Chancellor Olaf Scholz, and Italian Prime Minister Mario Draghi — also delivered another even more pointed and immediate message to Russia: The EU and its allies will not strongarm Ukraine into any surrender or territorial compromise to end the war.

“We want the atrocities to stop and we want peace,” Draghi said at a news conference in Kyiv, where he and his counterparts appeared with Ukrainian President Volodymyr Zelenskyy. “But Ukraine must defend itself if we want peace, and Ukraine will choose the peace it wants. Any diplomatic solution cannot be separated from the will of Kyiv, from what it deems acceptable to her people. Only in this way can we build a peace that is just and lasting.”

Such reassurance came as a huge relief to Ukrainian officials who have feared throughout the nearly four-month-long war that Western allies might try to force an unjust settlement.

Each of the three EU leaders has come under criticism in recent months for seeming to be too accommodating of Russia’s gripes and demands, and potentially too willing to appease Putin. Macron, for instance, negotiated endlessly with Putin to no success, and has repeatedly urged that Russia not be “humiliated.” Berlin, in turn, has been slow to send urgently needed weapons.

And yet, despite the encouraging rhetoric, the trio of leaders — representing the EU’s biggest, richest and most powerful countries — did not announce any dramatic new military or financial assistance for Ukraine, which might help tip the war in Kyiv’s favor.

By contrast, U.S. President Joe Biden on Wednesday announced an additional $1 billion in support for Ukraine.

Ukrainian casualties are rising as its military struggles to stop the Russian invaders now occupying large swaths of the south and east of the country, including a “land bridge” to Crimea, which Moscow invaded and annexed with lightning speed in 2014. And there is no indication that Ukraine can achieve any peace without a giant increase in aid.

The proclamation of support for EU candidate status came during a highly symbolic — if months late — trip to Ukraine, where the leaders visited Kyiv and Irpin, a suburb where occupying Russian forces allegedly committed atrocities before being repelled.

Other leaders, including the Czech, Polish and Slovenian prime ministers, have been visiting war-torn Ukraine since mid-March. European Parliament President Roberta Metsola went at the end of March, and European Commission President Ursula von der Leyen has visited Kyiv twice since the Russian invasion, in April and again last week.

During much of that time, Macron was preoccupied with his reelection campaign in France, and Scholz had declined invitations to visit after Ukraine snubbed the German president, Frank-Walter Steinmeier, who had wanted to visit in April.

For their visit on Thursday, the trio of leaders were joined by Romanian President Klaus Iohannis, representing the EU’s newer, eastern member countries — in an apparent effort to blunt criticism that the big, founding countries were acting as an exclusive clique.

Like his travel companions, Iohannis also voiced his unequivocal backing for granting candidate status to Ukraine and Moldova when the heads of state and government on the European Council take up the question at a summit in Brussels next week. Unanimity is required for approval.

In a required procedural step, the European Commission on Friday will formally recommend the candidate designation, but it will refrain from doing so for Georgia, which had also applied for membership. That decision, a serious setback for Tbilisi, is a nod to political turmoil in the country. European Council President Charles Michel has made largely unsuccessful efforts to intervene and ease the unrest in Georgia.

While Ukraine has been pushing hard to win candidate status, that designation alone offers little indication about when, or even if, Ukraine would ever formally become a member.

Some Western Balkans countries, including Albania, North Macedonia and Montenegro, have had their bids effectively stalled for years. On Thursday, those three countries publicly expressed their support for Ukraine and Moldova — eliminating a potential reason that some countries had cited for not granting candidate status next week.

But even as they voiced their support on Thursday, Draghi, Macron and Scholz all left open the possibility that the European Council could impose conditions on Ukraine, including demands for strengthening of democratic institutions and rule of law, before the country would be allowed to begin formal accession negotiations with the EU.

Many EU officials and diplomats said it is difficult to imagine Ukraine making much progress toward actual membership until it is no longer at war, and Macron has said that the overall process could take a decade or longer.

“Europe is at your side, it will remain so as long as necessary, until victory,” the French president said. Macron also used the visit to announce that France would send an additional six Caesar self-propelled howitzers to the Ukrainian military, adding to the dozen that have previously been sent, as well as a mobile DNA analysis laboratory to help with the processing of evidence of alleged war crimes.

“All four of us support immediate candidate status for membership,” Macron said, though he noted that it was just the start of a longer process. “This status will be accompanied by a road map and will also imply that the situation in the Balkans and the neighborhood, in particular Moldova, be taken into account,” he said.

Italy traditionally has maintained among the closest relations with Moscow of any EU country, and so Draghi’s strong words on Thursday supporting Ukraine and rebuking Russia for the war no doubt delivered a special sting to Putin.

“Today is a historic day for Europe,” Draghi said. “Italy, France and Germany — three founding countries of the European Union — and the president of Romania have come to Ukraine to offer their unconditional support to President Zelenskyy and the Ukrainian people.”

“The most important message of our visit is that Italy wants Ukraine to join the European Union — and wants Ukraine to have candidate status and will support this position at the next European Council,” he said, adding: “President Zelenskyy, as he just said, naturally understands that the path from candidate to member is a path, not a point. It is a road that will have to see the profound reforms of Ukrainian society.” 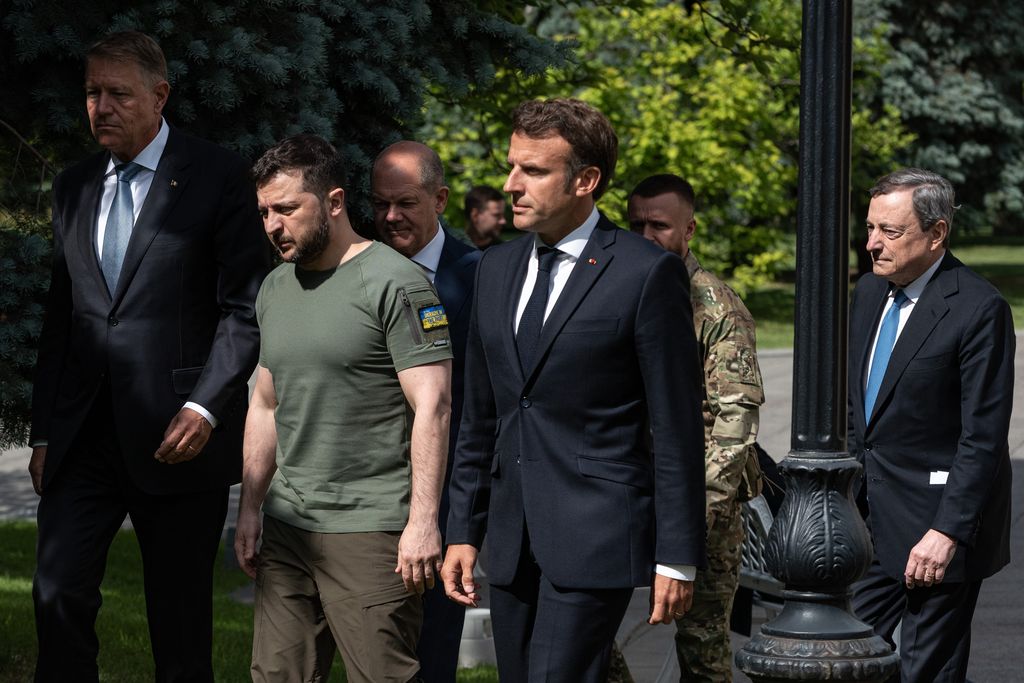 Zelenskyy, for his part, expressed satisfaction with the comments of his guests. “Our country is doing its utmost to become an EU member,” he said. “And the whole country desires it.” Among officials in Kyiv, however, the mood on Thursday was not particularly ecstatic — reflecting both the difficulties in the ongoing war as well as the reality that candidate status was just one step in a far longer undertaking with no certain end date.

In an interview, Ukraine’s deputy defense minister, Hanna Maliar, said it was important that the prominent EU leaders got a firsthand look at the destruction and evidence of atrocities in Irpin. “It is important to see the consequences of this war personally because it is very difficult to believe that this can happen in Europe in the 21st century,” Maliar said.

“When someone describes it, it may seem that a person’s emotional description may be exaggerating because it’s just scary what’s going on,” Maliar said. “It is very important to see the destruction that the Russian Federation is doing. Here you can see the full range of weapons that it uses, including those prohibited by international law. You can see that almost 20 percent of Ukraine’s territory is temporarily occupied. And this is almost the size of five Sicilys.”

The leaders all said they were moved by what they saw. And Scholz offered unequivocal support for Ukraine and sharp criticism of Russia.

“Ukraine has been in a heroic defensive struggle against Russia for 113 days,” the German chancellor said. “For this, I myself and Germany pays you great respect. It is clear that this invasion of Ukraine marks a turning point, because Russia is trying to shift borders in Europe. This is unacceptable.”

Scholz noted that Germany’s decision to supply weapons to Ukraine marked a historic shift, ending a longstanding policy of not delivering arms into an active war zone.

“Germany has broken with a long state tradition,” he said. “We support Ukraine by supplying weapons, and we will continue to do so as long as Ukraine needs our support.”

And he added his voice to the backing for Ukraine’s formal membership bid. “Ukraine belongs to the European family,” Scholz said. “A milestone on its European path is the status of a candidate country. The EU member states will discuss this in the next few days. We know: It needs unanimity among the 27 EU countries. At the European Council, I will push for a unified position. Germany is in favor of a positive decision in favor of Ukraine. That also applies to the Republic of Moldova.”

Scholz said that the EU, too, would need to make changes in order to accommodate a larger membership. “The EU needs to prepare itself and modernize its structures and procedures,” he said. Several officials have noted that Ukraine’s admission, because of its relatively large population, would fundamentally shift the balance of power in EU decisions made by qualified majority voting, in which country size plays a role. Ukraine would also be in a position for a relatively large delegation to the European Parliament.

The three leaders also used their visit to urge Russia to help open Black Sea shipping routes so that Ukraine can export millions of tons of grain that have been blocked — adding to a global food crisis.

“We also need to unlock the millions of tons of grain that are blocked in the ports of the Black Sea,” Draghi said.

“It is important to see the eyes of people who have lost their children and homes, who have lost their cities that can no longer be returned to,” she said. “What can be seen now in Ukraine should clearly encourage everyone to unite and stop Putin in Ukraine before he goes to Europe, because Putin’s appetites are much larger and wider than Ukraine.”