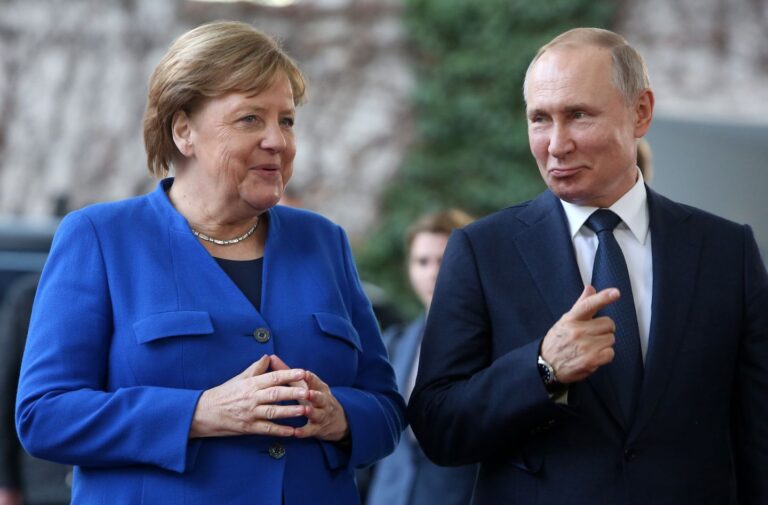 Russia’s invasion of Ukraine is a repudiation of a whole generation of German politicians from across the spectrum.

BERLIN — Germany is no stranger to the wrong side of history.

That’s why it shouldn’t surprise anyone that Berlin spent the past 16 years with its feet firmly planted on the wrong side of the divide over how to handle Russia.

Less predictable was the speed with which Germany abandoned its stance toward Moscow in recent weeks by halting the controversial Nord Stream 2 pipeline project, sending arms to Ukraine, embracing sanctions against Russia, and even announcing it would start pumping substantial sums into its own army.

In other words, it agreed almost overnight to do everything the U.S. and other allies had been prodding it to do for years. Berlin even ginned up a hashtag-ready motto for the shift: Zeitenwende, i.e. the dawn of a new era.

Weeks later, it’s become clear that what German leaders are really trying to say is: ‘Let’s move on.’

On that score, the Germans have had about as much luck as the Russian army in Ukraine. That’s because Germany didn’t merely “misjudge Putin,” as Angela Merkel’s longtime foreign policy adviser, Christoph Heusgen, the new chairman of the Munich Security Conference, said last week.

Germany’s stubborn insistence on engaging with the Russian leader in the face of his sustained aggression (a catalog of misdeeds ranging from the invasion of Georgia to assassinations of enemies abroad and war crimes in Syria) was nothing short of a catastrophic blunder, one that will earn Merkel a place in the pantheon of political naiveté alongside Neville Chamberlain.

Slowly but surely, it’s begun to dawn on Germans that Merkel’s soft-shoe approach to Russia — which reached its zenith with the 2015 decision to green light the Nord Stream 2 pipeline despite Russia’s annexation of Crimea and its role in the separatist war in eastern Ukraine — didn’t just open the door for Putin to go further, it effectively encouraged him to do so.

Russia’s invasion of Ukraine is not just a repudiation of Merkel’s chancellorship, however, but of a whole generation of German politicians from across the spectrum blinded by nostalgia for Ostpolitik and Wandel durch Handel, the 1970s-era détente policies championed by Chancellor Willy Brandt that according to German legend led to the end of the Cold War.

Germany’s collective responsibility is why turning the page is easier said than done. There is no Churchill-like figure in German politics who has been warning for years of the perils of trusting Putin. While Merkel deserves most of the blame for falling into the Russian leader’s trap, the truth is that Germany’s entire political class is guilty.

As Merkel’s finance minister and vice chancellor, the current Chancellor Olaf Scholz, whose Social Democrats were the driving force behind the Nord Stream pipelines, championed the notion that the best way to deal with Putin was through never-ending “dialogue.”

Jens Plötner, currently Scholz’s national security adviser, was one of the primary architects of that policy in his years as a senior diplomat in Germany’s foreign office, where he served as chief of staff to then-Foreign Minister Frank-Walter Steinmeier (a Social Democrat who is now German president) and most recently as the ministry’s political director. Even after Putin amassed tens of thousands of troops on Ukraine’s border in December, Plötner advised Scholz to stick with Nord Stream 2 and publicly repeat the fiction that it was little more than a “commercial project.”

Plötner’s old boss Steinmeier, who accused NATO in 2016 of “saber rattling and warmongering” for holding a military exercise on the alliance’s eastern flank, argued almost until the first shots were fired on Ukrainians that Germany should use energy as a way to build bridges with Russia.

These days, Steinmeier, who as president is meant to serve as Germany’s moral authority, occupies himself by organizing “freedom and peace” concerts with Russian and Ukrainian musicians. (One of the events took place in early March in Dresden as bombs rained down on Kharkiv, Ukraine’s second city.)

Over the weekend, Andrij Melnyk, Ukraine’s ambassador to Germany, declared he would boycott Steinmeier’s latest event, sayingUkrainians had no time for “grand Russian culture” while Moscow was murdering innocent civilians.

Though less responsible than either Merkel’s Christian Democrats or the Social Democrats for the policies that led up to Putin’s invasion of Ukraine, the smaller parties in Germany’s ruling coalition — the liberal Free Democrats and the Greens — haven’t exactly covered themselves in glory either.

While the Greens opposed Nord Stream 2, they did so as much for ecological reasons as out of solidarity with Ukraine. More significant was their steadfast opposition to arms deliveries to Kyiv, which only changed after the fighting started.

The Free Democrats were divided over what to do about Nord Stream 2, with many in the party, including deputy party leader Wolfgang Kubicki, supporting more engagement with Russia. According to Melnyk, Free Democrat leader Christian Lindner, who is also Germany’s finance minister, told him on the day the war started that there would be no point in Berlin sending weapons to Ukraine or shutting Russia out of SWIFT, the international payment system, because his country only “has a few hours” of sovereignty.

Skepticism over Ukraine’s prospects, not to mention concern over the consequences of going too hard on Russia, was shared by many in the main opposition party, the Christian Democrats (CDU). Just weeks before Russia’s invasion, CDU leader Friedrich Merz warned that suspending Russia from SWIFT could trigger an “atomic bomb in the capital markets.”

‘We were all wrong’

Having been wrong about Russia and Putin every step of the way, Germany’s politicians have resorted to the “who knew?” card.

“I was wrong, we were all wrong,” Wolfgang Schäuble, the éminence grise of German politics and longtime CDU finance minister, toldthe Welt am Sonntag over the weekend.

What Schäuble and his colleagues leave out, however, is that Germany’s allies had been warning it for years that it was underestimating Putin. When confronted with that reality, the Germans don’t know quite how to react.

After Ukrainian President Volodymyr Zelenskyy reminded German MPs in a speech to the Bundestag this month that the business Germany did with Russia helped finance the war against his country and attacked them for paying “worthless” lip service to the Holocaust, they gave him a standing ovation — and then promptly returned to regular business, which included wishing two MPs a happy birthday.

During the Cold War, the term “useful idiot” became a label for moderates in the West who fell victim to the communists’ credulous arguments.

From Germany’s veto of NATO membership for Ukraine and Georgia in 2008 to its pursuit of gas deals with Moscow to its resistance to send arms to Kyiv — the country’s leaders have served as Putin’s useful idiots.

All the while, the so-called Russlandversteher, the smug Russian sympathizers who populate the country’s political establishment, rejected criticism of their course, insisting they knew better while (literally) laughing in Washington’s face.

Even as allies welcome Berlin’s Zeitenwende, they aren’t fooled by its foxhole conversion.

Ukraine, which was pillaged by Germany during World War II, by the end of which it had lost more than 15 percent of its population, certainly won’t forgive and forget.

Germany won’t have any real credibility within the transatlantic alliance either (no matter how many billions it commits to spending on defense) until there’s an honest reckoning with the history of the Merkel-Putin years.

As Germany knows all too well, even if it’s possible to hide from history for a time, there’s no escaping it.