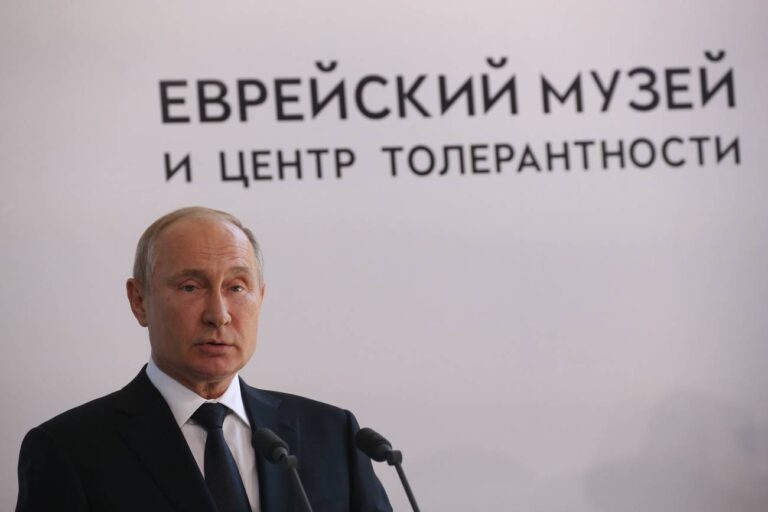 Yale’s Fortunoff Video Archive for Holocaust Testimonies published a statement on the Russian invasion of Ukraine. It condemns “Vladimir Putin’s deliberate, coldhearted, and Orwellian abuse of the language of the Holocaust.” In Putin’s claim “that Russia must invade Ukraine to “denazify” and end a “genocide,” it finds numerous evils, including “a diversion from his own fascism” and “an expression of antisemitism.”

If Putin’s invasion has been justified in part by employing expressions of antisemitism, how does this square with the fact that Putin has made it a point to disassociate himself from the racist and antisemitic legacy of Nazism? To help decode the Russian leader’s position, it’s instructive to look at the positions espoused by Alexander Dugin, a Russian intellectual who has done much over the years to formulate what appears to now be the Kremlin’s dominant ideology. While often described in Western media as “Putin’s brain,” Dugin’s influence on Russian leaders has waxed and waned over the years. More than political influence, his major contribution has been his ability to make the geopolitical ambitions of Putin’s post-Soviet Russia intelligible.

Dugin began his intellectual career as a critic of the Soviet Union, identifying with underground nationalist and spiritual movements. Some of these groups, such as the ultranationalist Pamyat, promoted antisemitic sentiments. Eventually he disavowed these ties and emerged as a leading spokesperson for Eurasianism, a political movement that sees Russia playing a central role in the geopolitical order bridging the divide between Europe and Asia.

The French scholar Marlene Laruelle has described Dugin’s political philosophy as an attempt “to rehabilitate fascism in Russia” by stressing its nationalist orientation while disowning its associations with Nazism and racism. Tellingly, Putin’s invasion of neighboring Ukraine has exemplified this vision.

Fascism embraces a mythic past, where the nation, once great, has experienced humiliation and loss of land, the result of weakness and decadence brought on by liberal democracy. To make up for these losses, real and supposed, fascist leaders encourage violent reassertion of previous greatness, as well as the destruction of liberal democracy in favor of a one-party state or, more typically, a single autocratic ruler who is synonymous with the nation.

In the Russian nationalist version of the mythic past, Ukraine is central. According to this mythology, there are no Ukrainians—just lost Russians living, whether they know it or not, in the heart of historic Russia. Under Putin, Russia has been harshly sexist and homophobic, familiar manifestations of fascist ideology. But Russia’s violent imperial war against a neighboring cosmopolitan democracy that it seeks to absorb is the clearest manifestation yet that its animating ideology is something akin to classical fascism.

Dugin and Putin both claim to be opposed to racism and Nazism. They insist that their primary enemy is not any one people, religion, or race, but rather “confused” cosmopolitans, liberals, and secularists. This 20th-century set of chiefly antisemitic stereotypes is also used to describe liberal democracy.

Putin has enjoyed the support of Russia’s chief rabbi, Berel Lazar, and Dugin counts right-wing Israeli Zionists among his comrades. As Dugin explained in April 2021 in the Israeli journalDehak:

The Gaon of Vilna said: in the End of Days the main enemy will not be the husk of Ishmael [Islam] or the husk of Rome [Christianity], but rather the husk of Jacob [Jews], those who are designated as the mixed multitude, the assimilated people who, according to the Gaon of Vilna, have underwent modernization and colonization. [In the End of Days], the chief enemy of the Jewish tradition will come from its own house and not from the outside in the form of Christianity and Islam. The chief enemy … is the Jewish People. They are the chief enemy of traditional Judaism … Perhaps this is not well understood, but I think this interpretation is very important. In our own community, in a similar way, the chief enemy of the Russian nation are liberal Russians and not the representatives of other groups. … In my opinion, it follows, we need a deep de-colonization of [the forces of modernization] from Africa, Asia, Latin America, and Israel, in Russia and Europe and in the United States. In the United States this means being made free from the heavy hand of the elite-racist ultra-liberal that seeks to annihilate American values.

Here, Dugin represents himself as the champion of Judaism—or at least his conception of traditional Judaism—against the forces that would destroy it: Jews themselves. Dugin represents “traditional” Jews as those who are attached to the land of Israel. The enemy of Judaism are the assimilated, cosmopolitan Jews, those who are part of “modernization.” More generally, Dugin says that each national community’s existential threat consists of members of that community—the ones who embrace cosmopolitanism, liberalism, tolerance, and democracy.

Dugin’s appeal here is transnational—it is made to the traditionalists in every group opposed to feminism, secularism, LGBT rights, and liberal tolerance. For Dugin, the enemy of each group is to be found within its midst: those who support multicultural, liberal societies. Traditionalists can and do operate within the parameters of liberal democracy, of course. But in the new Russian fascism, traditionalism is seen as inconsistent with and opposed to liberal democracy.

Increasingly, the global far right denounces racism and antisemitism even while working to extinguish liberalism and multiculturalism. By identifying “real” Jews as the ones connected with the land—specifically Israeli nationalists—the global far right believes it is justified in its repeated use of antisemitic tropes aimed at Jewish targets.

Thus, for many in Putin’s circle, Ukrainian President Volodymyr Zelensky is not really Jewish. Similarly, former New York City Mayor and Donald Trump lawyer Rudolph Giuliani—along with Brexit backers Raheem Kassam and Andy Wigmore—have sought to challenge the Jewish identity of George Soros, in the context of attacking him for his philanthropic and political efforts. Never mind that the rabbis, the State of Israel, and Adolf Hitler would all consider Soros a Jew—“I’m more of a Jew than Soros is,” said Giuliani. That’s because for them, “real” Jews are religiously traditionalist and quintessentially nationalist—and not invested in, say, liberalism or democracy.

The Duginist invocation of traditionalism is clearly meant to appeal to members of minority groups historically targeted by fascism, above and beyond merely using them as tokens for narrow political purposes. But is Russian fascism free from racial, ethnic, gender, and religious hierarchies? Is it free from the antisemitism that is central to so many traditional European versions of fascism?

When a contemporary society’s institutions were formed under conditions of explicit discrimination, they will continue to contain practices that perpetuate various disparities, even if no one within those structures has an explicitly discriminatory attitude (a key insight of critical race theory). Far-right movements and political parties often campaign on a platform of eliminating attempts to reform or replace these discriminatory practices, as well as introducing new ones, like opposing immigrants, women’s rights, religious and sexual freedoms, and the freedom to teach history.

It is one thing to wage cultural battles within the boundaries of liberal democratic politics, which preserve minority rights and allow the regular replacement of political leaders by democratic means. Traditionalists can and often do operate within this sphere.

Fascism breaks these boundaries. In fascist ideology, liberal democracy is itself the existential threat to traditionalism. Putin’s willingness to massacre people he falsely regards as his own points to his real enemy: cosmopolitan liberal democracy.

In Putin’s ideology, it is Ukrainian liberal democratic citizenship that represents the real threat to Russian greatness. Traditionalism demands a “deep decolonization” of these modernizers everywhere, perhaps especially the Jewish ones.