Semantic Corpus|Humanitarian|Les Kubas and the fight for Ukrainian theater: the right to exist
Humanitarian

Les Kubas and the fight for Ukrainian theater: the right to exist

Everyone remembers that Russia’s attack on Ukraine on February 24th, 2022, was preceded by Putin’s speech on “non-aggression and a special operation without enforcement,” including the statement that Ukraine has never had its own real statehood and that Ukraine received it as a gift from Lenin. 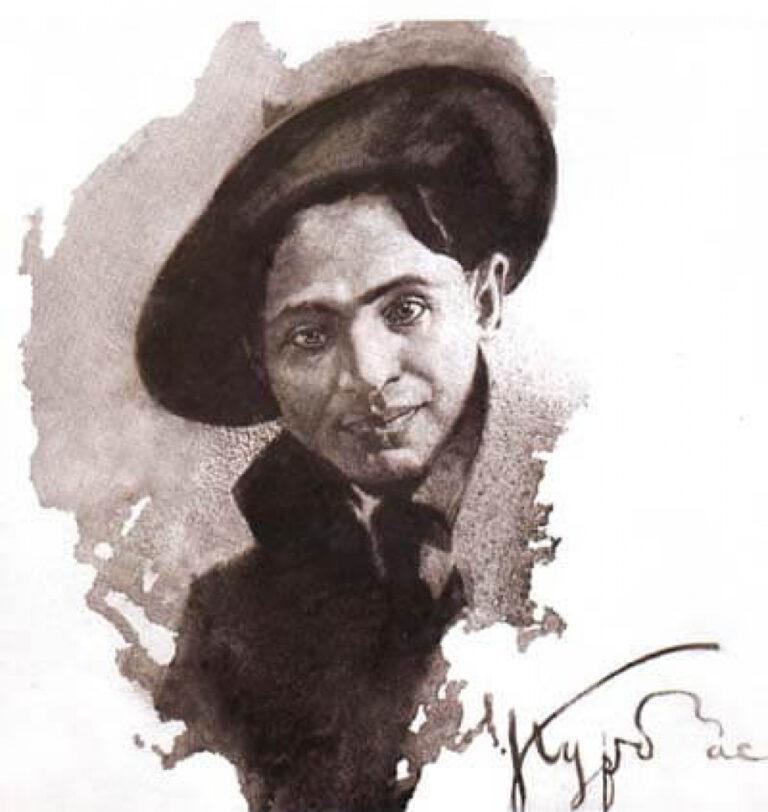 This was likely in reference to the creation of the Ukrainian Soviet Socialist Republic in 1922. Of course, this speech, coupled with Russia’s desire for “historical justice,” could not acknowledge the existence of the Ukrainian People’s Republic (the UPR) between 1917 and 1922. The modern Ukrainian state is the direct descendant of the UPR. However, both then and now, this fact contradicts the official Moscow propaganda. Therefore, any mentions of the UPR must be destroyed. Propagandists quickly gained momentum and swept away the beginnings of naive communism back then. But despite their rhetoric, which was still being shaped in the mouth of the proletariat revolution, having not yet reached Ukraine, new art movements were evolving in Ukraine in a particular theater.

Born in Halychyna, the young graduate of the Faculty of Philosophy of the University of Vienna, Oleksandr-Zenon (Les) Kurbas, had arrived in Kyiv on invitation from his older colleague Mykola Sadkovskyy, one year before the UPR emerged. He started as an actor in Sadkovskyy’s theater and soon founded a studio of young actors titled “Molodyy Teatr” (the Young Theater).

In 1917, the Molodyy Teatr published its “Artistic Manifesto” text, where Les Kurbas addressed the spectators and proclaimed the independence of the theater from propaganda, delcaring its fundamental difference from the educational or moral institutions and from the the ecstatic combination of spectators and actors. He argued that the theater is art with its main goal being the discovering of its own values and means of expression through gestures, sounds, voices, and rhythm of the performance.

The team of the Molodyy Teatr wanted to portray the lives of modern Ukrainian citizens as representatives of modern Europe – and for the first time since the overthrow of the Russian Empire and the lifting of bans on all Ukrainians, there was an opportunity to widely implement this idea. It is noteworthy that, even then, Kurbas clarified this was not “Ukrainophilism” but a new national form of European theater – it was meant to be greater than the provincial manifestation of traditional serf theater.

The theater supported progressiveness through its chosen repertoire and wide, bold experiments with stylistics. In just a few seasons, Molodyy Teatr managed to present different directions and dimensions of theatricality – what Kurbas considered the highest and most essential value on the stage. The Young Theater undoubtedly introduced new theatrical trends that gained popularity with the advent of directorial theater:

The Russian theater has always loudly boasted that it was “searching for the truth.” In practice, this meant the creation of an illusion of everyday reality on the stage through Stanislavsky’s psychological realism – which may have also been interesting if it had been just one of the options of free choice.

Difficulties begin when it becomes the only possible aesthetic. Kurbas’s theater did not fall under this philosophy, focusing on the diversity of theatrical language which spoke, among other things, about the inner reality. His theater sought an artistic form of sharpened perception or abstract metaphors – in short, it did everything that could not be squeezed into Bolshevism’s canon, later called “socialist realism.”

Dialogue with Europeans was the basis and material for artistic pursuits – in parallel with the production of plays based on Taras Shevchenko’s poetry, Kurbas wrote an article titled “New German Drama” about the modern actor or “Smart Harlequin.” Later on, at the end of the 1920s, Les Kurbas came to Germany as a well-known director. There, he gave lectures in German on expressionism and its Ukrainian version. It is known that the young Bertold Brecht and Erwin Piscator were present at his lectures. Contemporaries recall that this trip was associated with Max Reinhardt. Similarly, in the late 1920s, the Kurbasiv Theater in Kharkiv released the first musical in Ukraine in the genre of jazz revue “Hello, on the wave of 477!”.

Evidently, after centuries of mockery of Ukrainian culture, this short period of post-revolutionary freedom in liberated Kyiv was enough to burst the potential that manifested itself in all artistic genres.

In the walls of the Molodyy Teatr and later in Kurbas’ other theaters, Kyidramte and Berezil, actors, playwrights, and set designers gathered, aiming to create a new Ukrainian theater, first in Kyiv and then in Kharkiv. But the fruitful period was not destined to flourish for a long time. Most of those who insisted on this idea after 1933 were killed immediately or later in concentration camps. Some were lucky enough to escape after serving their sentences during World War II. Less persistent ones were forced by the regime to work within its ideological boundaries.

Here are the fates of just four of these theatrical artists:

Of what were Kurbas and his colleagues accused? Nationalism and fascism. The accusation of the People’s Commissariat for Internal Affairs of the Soviet Union (the NKVD) read: “Nationalism and fascism – this is the flag under which Kurbas, united with a group of Ukrainian nationalists, in particular, in the field of literature, begins to speak up.”

The rhetoric is unchanged. The Russian propaganda machine calls the desire for national self-determination and freedom “nationalism”, and only death can be obtained for it.

Kurbas was sent to a concentration camp for five years and shot along with his friend, playwright Mykola Kulish, in the Sandarmokh forest.

Les Tanyuk, a researcher of Les Kurbas’s work, talks about documents discovered in 1997 that provide previously unknown details on the execution of the order:

“1997, the year of the sixtieth anniversary of the Solovetsky tragedy and the Great Terror, was a turning point. The director of the Research Center of St. Petersburg “Memorial” V.V. Joffe was lucky enough to find the latest terrible documents. That was an order on the execution of 1,116 Solovetsky prisoners and a report by the deputy head of the administrative and economic department of the Leningrad Region UNKVD, Captain Matveyev of the State Security Service, on the execution of the sentence.

“The shooting protocols of 81, 82, 83, 84, and 85 meetings of the special troika of the NKVD of the Leningrad region were revealed. In five days, Captain Matveyev personally shot a thousand and eleven people with a revolver (one of the five remaining died on the way, four were sent to Kyiv and Odesa). Half frozen prisoners were brought in a car, placed near the dug pits, and security officer Matveyev shot them in the back of the heads. If it seemed to him that the person shot was still alive, he picked a crowbar and smashed the skull of the fallen.

“Having accomplished his task, Captain Matveyev got extremely tired. He got a trip to the Black Sea and was soon awarded with the Order of Lenin. Though this did not save him from prison, he was later convicted (“for abuse of power”) however was soon released and received a personal pension till the end of his days.” (Les Tanyuk “Talent and luck”, p.41-42)

By the 1960s, isolated semi-underground evenings dedicated to Kurbas were possible. At the same time, a new wave of Ukrainian drama emerged, and some directors emerged who either opposed the regime or avoided following its instructions directly. Among them were students and followers of Les Kurbas: Maryan Krushelnytsky, Les Tanyuk, and realistic directors, who looked for their own theatrical language but instead came across bans. In one instance was the banning of 27 performances by Volodymyr Ogloblin, a Ukrainian and Soviet director whose last period of his career was during Ukraine’s independence.

The only “crime” with which the Bolshevik’s leaders charged Les Kurbas and the repressed Ukrainian theater was “nationalism” or noncompliance with Soviet propaganda.

The artist’s behavior, which made it clear that Moscow was no longer the center of the world, and his relations with colleagues from Georgia took precedence over the Olympics in Moscow and posed a threat to the Soviet government of that time. Virlyana Tkach, and American researcher of Les Kurbas, explains that is why Stalin destroyed Kurbas and the entire Ukrainian avant-garde of that time. The theater was the foundation of a new community and its independent thought. Even a century later, Russia cannot accept such a position.

March 31, 2022, marked the 100th anniversary of the founding of the Berezil art association. And on March 16, 2022, a bomb was dropped on a theater in Mariupol that was no longer even a “regime-inappropriate” theater. It had assumed the role of a bomb shelter for women and children who were hiding from the deadly weapons of the Russian military. The shelter advertised itself as such to the whole world with a huge sign on the asphalt.

However, it is difficult to erase the impression that the world does not want to hear unpleasant things or share responsibility for what is happening. Numerous condemnations of Nazism and genocide in the democratic world remain topics for dissertations and university articles that have little intrusion into real life. In its attempts to avoid parallels with Nazism, the EU’s cultural community is more concerned with correct wording than its attempts to stop and expose Russia’s desire to destroy all manifestations of Ukrainianness.

The Alliance of International Production Houses refuses to publish on its page the statement of TanzLaboratorium, a Ukrainian artist research collective, because it believes that the web pages of civilian institutions should not be used to join the discussion around death and enmity, and “comparisons with Nazism” are historically false.

Russian Nazism is fundamentally different from German because any historical phenomenon is unique, and any historical comparison is wrong. Russian Nazism stretches for centuries and is like “slow-acting” torture. In the intervals between acts of violence, there is a departure to the position of greatness and beauty. The controversial combination of black and white, as we know, is perhaps the most effective means of creating and promoting a new ideology – in this case, Russian culture.

Ukrainians have developed immunity to these tortures – that is why we are still alive and continue to fight. Whether to make your own mark in this struggle or to remain a passive spectator of the theater of military, cultural, and ideological confrontation is a matter of choice for each world democratic system. This is the essence of the choice of values ​​that underpin democracy.