Semantic Corpus|Economy|‘It was worse than hell’: life in Mariupol under Russian occupation
Economy

‘It was worse than hell’: life in Mariupol under Russian occupation

Around 90,000 Ukrainians remain in the city with little access to electricity, phone, internet, water or healthcare Amonth after the end of the siege at Mariupol’s Azovstal steelworks, which marked the Russian capture of the coastal city, life continues without access to basic amenities. Those who were left behind are largely cut off from the outside world with limited mobile phone and internet connection.

“It was worse than hell there. There are no words to describe it,” said 55-year-old Vladimir Korchma, who had lived all of his life in Mariupol where he worked as a machinist at a local factory.

“We had no gas or electricity. Only the lucky ones had water,” said Korchma, who left the city at the end of May.

Korchma, a sturdy man with piercing blue eyes, spoke outside the help centre in Kyiv for people fleeing Mariupol. The centre, which provides food and organises housing, is the first port of call for many who had left the city.

Korchma proceeded to open his phone to show images of a destroyed apartment block, as did many of his fellow ex-Mariupol residents, all desperate to show the impact of Russia’s invasion on their lives.

“This was our home,” said Korchma, pointing to the screen. “Now it is in ruins. I would never have believed that I would be homeless at 55.” 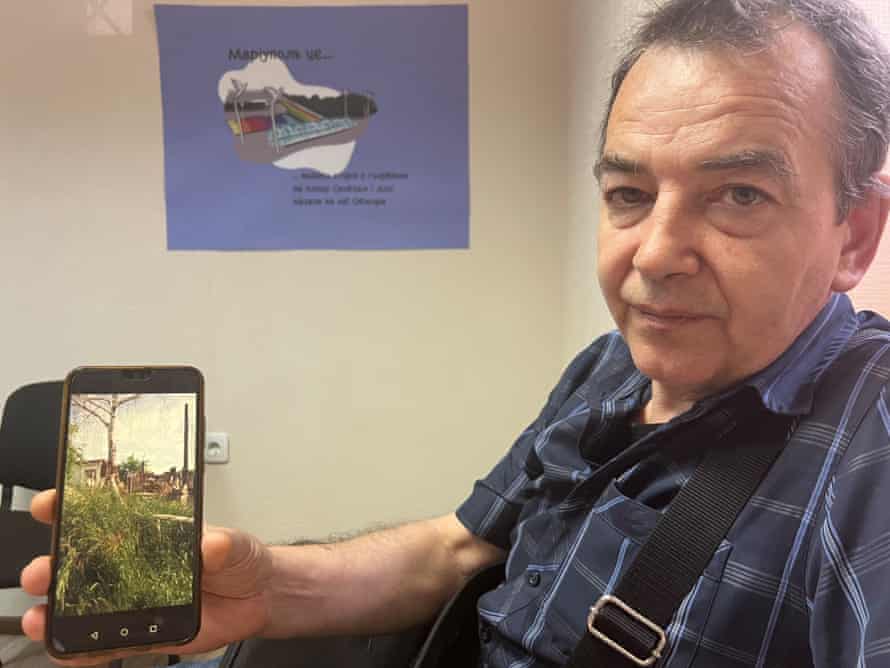 Contact with his brother and others who stayed in Mariupol is very difficult but not impossible, Korchma said. Internet and phone provider Kyivstar stopped working at the end of March, and Korchma said his brother had to walk to the outskirts of town to find a signal.

Russia has been eager to fill the information vacuum experienced in Mariupol by bringing vans with large mounted screens into the captured city. The “mobile information complexes”, as Russia calls them, play state TV news segments and political chat shows where pundits support the invasion.

“They had put those screens around all the main squares,” said Katerina, who asked for her last name to be withheld because she was currently in the Russian border town of Rostov-on-Don after leaving Mariupol on the 6 May. “When my mother and I were in line to get food and water, we were forced to listen to stories about how we were being liberated from Nazis,” she added.

Russian state media have eagerly announced that the sign welcoming people to Mariupol has been replaced with one painted in the colours of the Russian flag.

“De-Nazification has been a success in Mariupol,” wrote Vladimir Solovyov , one of Russian state TV’s main presenters.

More reports from the city, even from those who supported the war, have painted a far less rosy picture. Even months after the Kremlin claimed to have near-total control of the city, Russian media have done little to hide the dire state of affairs in Mariupol. 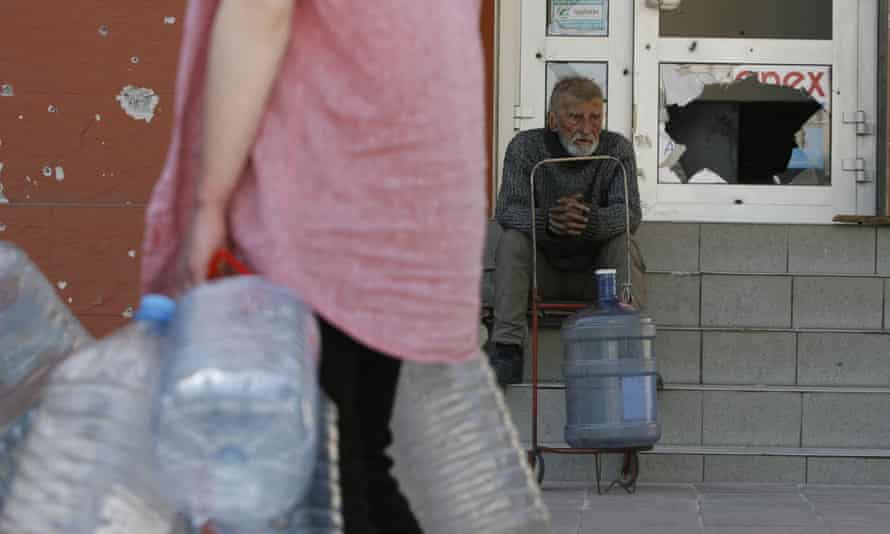 “Residents of the destroyed Mariupol are cooking broth from pigeons on bonfires in their courtyard,” Russia’s state-owned NTV reported from the city late in May. Much of the city lacks electricity and water, those reports said.

Meanwhile, the deteriorating health situation and lack of medicine are making matters worse.

Back at the help centre, Oleh said that shortly before leaving the city on 2 May, he brought his younger brother to the dentist after his sibling experienced weeks of “agonising” tooth pain while hiding in the bunkers.

While there, they discovered that the dentist had run out of anaesthetics. “His tooth infection was spreading so they had to do something. They took his tooth out without anaesthesia. He screamed and screamed,” Oleh said.

There are now fears that cholera and other deadly diseases could kill many more people, as corpses lie uncollected and the summer brings warmer weather. “The smell in the city was just so intense wherever you went,” said Katerina.

Videos posted on the Telegram сhannel “Mariupol Now” – which was set up by a Ukrainian volunteer to get information out of the city – show disturbing scenes. In one particularly gruesome picture, which the channel said was taken a few days ago, dozens of bodies are seen lying in a parking lot.

Petro Andryushchenko, an adviser to the Ukrainian mayor of Mariupol, recently estimated that 22,000 died in the two months of fighting, while a person coordinating burials in the city told the Guardian that the number could be closer to 50,000.

While pro-Russian separatists have pledged to rebuild the city into a “resort”, the economy appears to be at a standstill with long queues for food and humanitarian help everywhere.

“Think about the end of the Soviet Union, but five times worse,” said 54-year-old Tatiana, who left Mariupol in April but has been in touch with her sister and mother who are still there.

Soon after the pro-Russian separatists came, Tatiana said the “occupiers” promised locals that their outstanding pensions would be paid out, but Tatiana and others said that very few in the city had received any payments.

Instead, she said, pro-Russian officials ordered that only those who had traded their Ukrainian passports for Russian ones could apply for benefits. Pro-Russia separatists had earlier announced that they had started handing out Russian passports in Kherson and Melitopol, two occupied cities west of Mariupol. 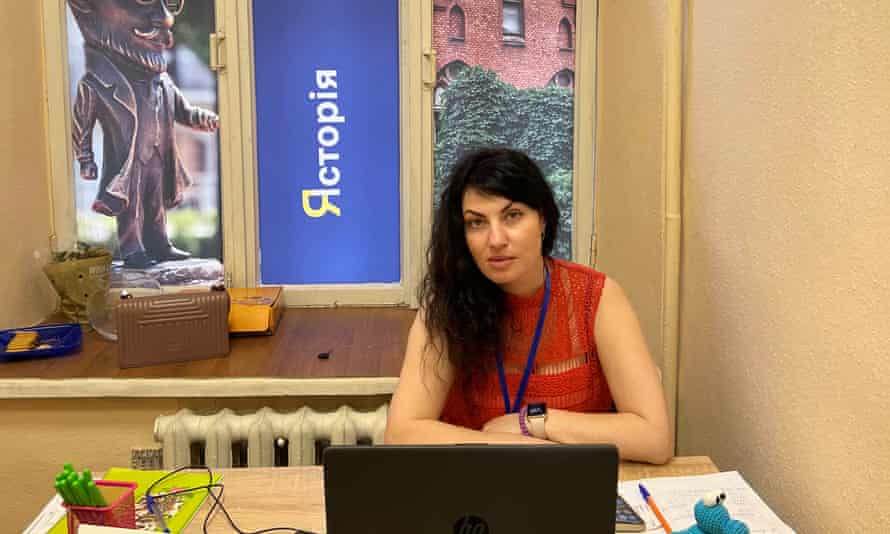 “A never-ending stream of pain,” is how Anna Chasovnikova, the psychologist at the help centre, described her therapy sessions with those who have left Mariupol.

“One of the biggest problems is that people are struggling to accept that their past lives are gone forever. They can’t look forward anymore,” said Chasovnikova, who herself left the city at the very beginning of the war.

She admitted that, despite being an experienced psychologist, she often found it hard to help her patients, who were coming to her with stories that “were unimaginable for the 21st century”.

“What do you say when a girl tells you how her father was blown up in front of her during his own birthday celebration?” she asked.

Chasovnikova said her patients also had a hard time understanding why a country that many in Mariupol had considered a friendly neighbour “could do such a thing”.

Mariupol, just 60km (37miles) from the Russian border, is a largely Russian-speaking city where both economic and family ties with Moscow run deep. “In the end,” Chasovnikova said, “I tell them that these are the actions of a schizophrenic president. And maybe there is just no point trying to understand him.”

The help centre has conducted daily animal-assisted therapy sessions. At the centre, one family sat in a circle, patting an excited labradoodle. 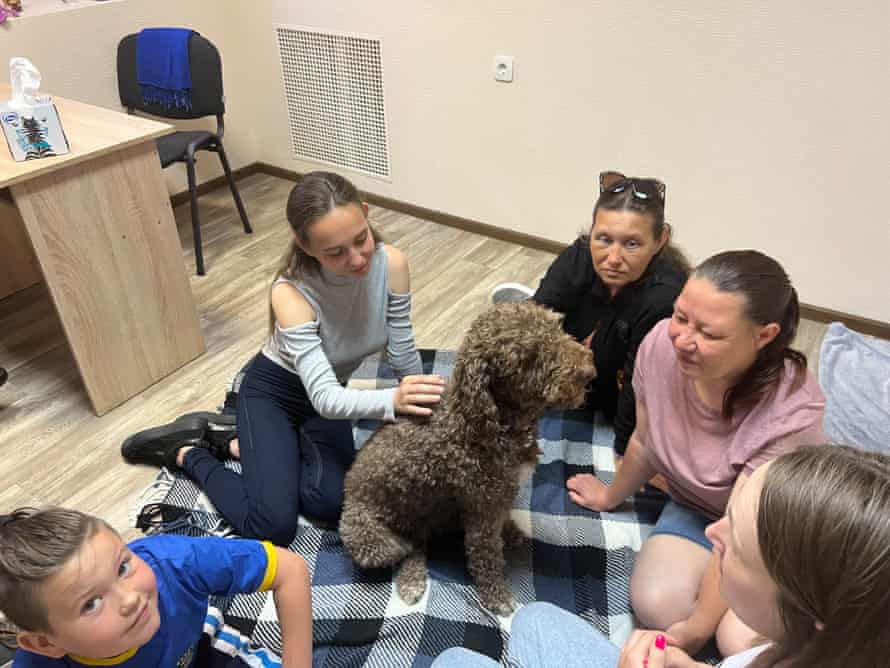 “It helps the children and their parents to forget about the past, at least for an hour,” Chasovnikova said.

About 90,000 people remain in Mariupol, compared with its pre-war population of 500,000, many of whom were too old to leave or didn’t want to abandon their homes.

“Ukrainians are very attached to their belongings,” Chasovnikova explained. “Some of those who stayed just didn’t want to leave their houses.”

But there was also some resentment felt towards those with pro-Russia sentiments who stayed.

Nadia, a former boxing coach in Mariupol who left for Kyiv in March, said she knew of several men who were part of her gym that had welcomed the Russian forces and had since stayed. “Well, now enjoy living in it,” she said.

For Korchma, the machinist, and others who moved to Kyiv, a long and uncertain road lies ahead.

While he said he was grateful for the apartment that he and his family had received in the capital, he “longed” for the days he could return to his hometown.

“I had a purpose there, we built a life. Things weren’t perfect, but they worked,” he said. “It was all taken from us.”

… we have a small favour to ask. Millions are turning to the Guardian for open, independent, quality news every day, and readers in 180 countries around the world now support us financially.

We believe everyone deserves access to information that’s grounded in science and truth, and analysis rooted in authority and integrity. That’s why we made a different choice: to keep our reporting open for all readers, regardless of where they live or what they can afford to pay. This means more people can be better informed, united, and inspired to take meaningful action.

In these perilous times, a truth-seeking global news organisation like the Guardian is essential. We have no shareholders or billionaire owner, meaning our journalism is free from commercial and political influence – this makes us different. When it’s never been more important, our independence allows us to fearlessly investigate, challenge and expose those in power.