The war in Ukraine, which was cynically launched by Russia, doesn’t only create suffering for humans. Two months of hostilities have become a terrifying ordeal for many Ukrainian animals: pets, livestock, zoo and wild forest dwellers. Unfortunately, not all of them have been lucky enough to survive it. 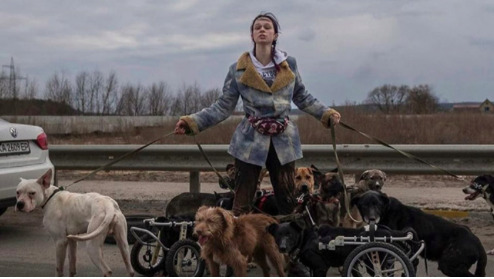 On February 24, 2022, at 5am, Ukrainians woke up to the powerful explosions of Russian missiles. In the first minutes of the war, animals unfamiliar with such loud sounds experienced considerable stress. Most owners managed to take their pets with them to safer regions of Ukraine or abroad. However, many pets were lost on the way, some did not survive the exhausting evacuation, and some were hastily forgotten by the owners. The stories of pets that have become hostages of war and volunteers who save them despite the mortal danger are amazing.

The photo of a Ukrainian woman with her head proudly raised managing a large group of dogs, many of them on trolleys, has gone viral across the world. The girl in the photo is Anastasiia Tykha, who together with her husband Artur Li took 15 dogs from war-torn Irpen, in particular those with disabilities, including 5 cats, a chameleon, a turtle, a hamster and a spider.

Before the war, Nastya and Artur picked up stray dogs on the street, treating them and finding them homes. Among the volunteers’ charges, there were many dogs that, due to accident or human cruelty, were disabled. The couple bought wheechairs for them, Nastia socialized and trained them. Most of the pets that Nastia took care of have tragic backstories. Luna the dog has been jumping on three legs since she was hit by the car. Staffordshire terrier Koltyk is missing a paw as he was injured at birth. The dog, nicknamed Didus (Grandpa), is 15 years old and a little deaf.  Many dogs rescued by the animal-rights activists will never be able to walk. There are also those who came to the volunteer because of human cruelty, e.g. a dog who was hit on the back with a stick and had their spine broken.

When the Russian army attacked Ukraine, all hell broke loose in Irpin near Kyiv. The city was constantly bombed and shelled, tanks were moving through the streets. Irpin was under siege without water and food. The evacuation was extremely dangerous. Endless stories of terror and pain filled the news. While trying to leave the destroyed Irpin, the invaders shot a mother and two children. Another murdered family, a mother and a child, were buried in the yard of their house. The small comfortable town of Irpin turned into a complete ruin.

Despite the danger, Nastia and Artur decided to flee with a large number of pets, which greatly complicated the evacuation. “Pets are like kids to me. You can’t leave your kids,” said Nastia. It took 15 minutes to pack. They did not know where they would live in Kyiv or where they would keep the pets.

They had to lead the dogs first through the whole of Irpin, then cross the bridge and load them into the car, which was provided by other volunteers from the Pliushka Charitable Foundation. The volunteers put the cats in a trolley from the supermarket. At first, it was very difficult for the Nastia to walk, because the dogs did not want to go and resisted, large animals overturned trolleys on which dogs with disabilities were. She had to lift them up and put them back. Nastia had to carry some of the more disabled dogs. During the evacuation, she broke her finger, and her whole body hurt for a long time after from the pets dragging her in different directions.

On the way to the broken bridge, Nastia and Artur were assisted by passers-by and the soldiers of the Territorial Defense units. They took the pets that were the hardest to lead. Only non-contact ones, who did not trust anyone but her, remained with Nastia. The guys from the Defense unit gave the volunteers a dog named Druzhba (Friendship), who was wandering around the city alone. Now, they are looking for a family for the dog. They came across another dog, a shepherd mix, and took it with them as well.

On their way, the volunteers lost 4 dogs, in particular, their own dog Zevs (Zeus). A few days later, Nastia and Artur returned on foot to the destroyed and abandoned Irpin to search for the lost pets. The couple was lucky again: the second rescue operation was almost uneventful. A few more poor pets were picked up on the street. Today they are all living in a private house in Kyiv.

The couple continue to take care of pets affected by hostilities and are looking for homes for them abroad. 8 dogs and 35 cats have already gone to Germany. But the more troubled animals, who have become distrustful of people and loud sounds, stay with them.

A large number of zoos throughout Ukraine have repeatedly come under enemy shelling and bombardment. Mykolaiv zoo turned out to be in a difficult situation because of the Russian shells and cluster missiles. Russian shells almost destroyed the ecopark in Kharkiv. From the first days of the war, Oleksandr Feldman, the founder of the ecopark, reported on the predicament of animals. Some of them were killed during the shelling, and some were unable to survive hunger and cold because the occupiers did not allow workers to enter the ecopark.

When the bombing destroyed enclosures with large predators, the founder feared that the animals would have to be put to sleep for the safety of the city inhabitants: frightened tigers and lions could cause trouble in the city. But dozens of zoo volunteers came to help Oleksandr. The animals were rescued and taken to safety.

“The evacuation of our animals began almost from the first days of the Russian invasion. This process is not just complicated, but even deadly. Feldman Ecopark is a social and humanitarian multicomplex with a large zoo exposition,“ said Vadym Vorotynsky, head of partnership projects at the ecopark.

Before the war, about 5,000 animals of almost 300 species used to live in the Feldman Ecopark. Since the park is located in the northern suburbs of Kharkiv, since February 24, it has been in the direct line of fire. “Almost every day, its territory was shelled with various weapons. Bombs, missiles, shells, mines, large-caliber bullets – almost every deadly thing  came here during two months,” said the ecopark employeers. Russian invaders killed about 100 animals, destroyed part of the enclosures, and completely destroyed the zoo infrastructure.

The park staff and volunteers support the lives of animals and carry out their evacuation, despite the deadly risk. “Almost 80% of pets have already been taken to safe places. Five of our employees have died saving them,” says Vorotynsky.

Most of the large animals were evacuated from the ecopark, including lions, tigers, jaguars, leopards, bears and wolves. Along with them, ungulates, primates, large turtles and tortoises, birds, small animals were taken out as well. The  footage of the evacuation of kangaroos, tapirs and alpacas from the park has traveled across the world.  At the very end of April, they managed to evacuate the Himalayan bear. The complete evacuation of the ecopark is planned for mid-May. The animals are being relocated to other zoos in the country or to specialized shelters where they are currently undergoing rehabilitation.

An ostrich farm in Yasnohorodka in Kyiv region also suffered enemy shelling. Dozens of innocent animals died, some of them were killed by direct enemy hits. However, many animals were evacuated, including llamas, alpacas, camels, and pink pelicans.

Along with such high-profile operations to save animals, it is important to note ordinary Ukrainians who tried to save abandoned pets or animals whose owners were killed. The story of Ukrainian Hachiko can leave nobody indifferent. Tetiana Zadorozhniak and her Akita Inu dog lived in Makarov, Kyiv region. When the occupiers entered the village, the woman was at home waiting for a friend with whom she was supposed to evacuate. However, Tetiana did not have time to escape – she was raped and brutally stabbed to death by a Kadyrovets. The dog named Rini, waited for several weeks for his owner on the doorstep, categorically refusing to go with volunteers. The emaciated dog only agreed to drink water and eat without leaving his post… It was only later that they managed to take Rini away. At the moment he is safe with his new owners. 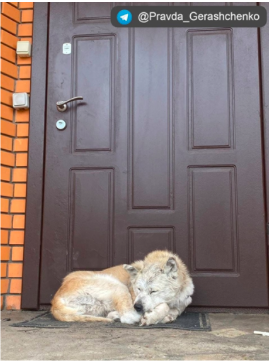 Animals were killed for fun

During the occupation, the Russian military showed considerable cruelty not only to people, but, for some reason, to animals. For fun, they killed and abused stray dogs, livestock, poultry, and other animals that came their way.. In Borodianka, Kyiv region, more than 300 dogs were killed in the shelter as a result of occupation.

Shepherds were found shot together with their owner on one of the Ukrainian roads. The man was taking the dogs to a safe place, but Russian soldiers cynically killed them right on the road. The owner and two dogs died, one survived. He sat next to his master for a long time, waiting for him to wake up. The dog was then taken away by animal protection activists.

When the Ukrainian military pushed the Russian army out of Kyiv region, new atrocities were revealed. For example, in Vorzel, fiends left behind chicken heads hung on a rope for drying laundry. Why did they do it? This question went unanswered. The facts of torturing animals by Russian soldiers were commented by an officer of the Armed Forces of Ukraine Viktor Trehubov: “The occupiers are people whom we call thugs, and medicine calls them psychopaths. People deprived of empathy are deprived of understanding the value of both their own and someone else’s life.”

Humanity and the ability to sympathize are one of the signs of a civilized society. Ukrainians, who themselves are in danger, are trying to help destitute animals: they feed stray dogs and cats, the number of which have increased during the war, take their neighbors’ pets or look for new owners for them. However, many animals are still suffering. They can’t protect themselves. And the sooner the war in Ukraine ends, the more innocent lives will be saved.