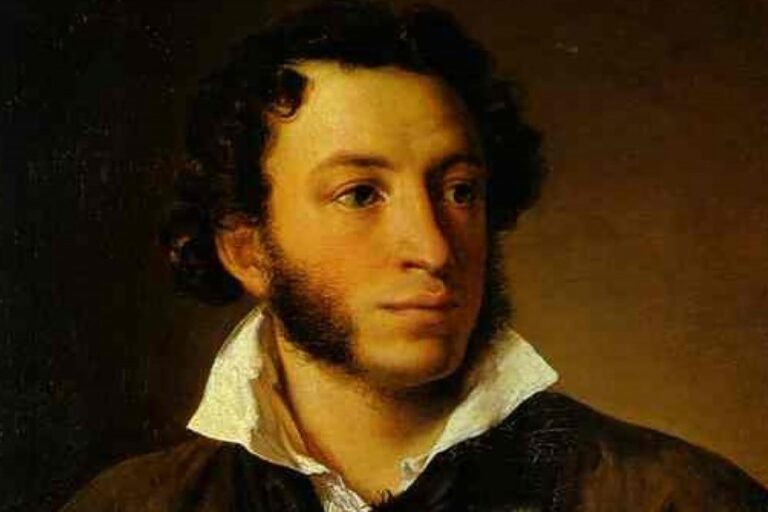 One of the streets in Hoholiv—a town just east of Ukraine’s capital, Kyiv—bears the name of Mikhail Lermontov, a 19th-century Russian poet. Lermontov never visited Ukraine, and only a few of his poems touch on Ukrainian topics. But streets all over Ukraine are still named for him and other Russian cultural figures, a heritage of its Soviet imperial past. Hoholiv, which saw heavy fighting in March, similarly honors Anton Chekhov, Vladimir Mayakovsky, and Aleksandr Pushkin. Naming streets in every city, town, and village is just one instrument for an empire to designate and control its colonial space. Every prominent Russian name was a way to exclude a Ukrainian one. Street names were a tool to erase local memory.

What about Lermontov? He has a specific image in Russian literature as a writer, soldier, womanizer, and romantic poet. He conjured idyllic images of the Caucasus, which had captured his imagination like so many other famous Russian writers. Like Pushkin, he died dramatically in a duel.

But behind the romanticism of the early 19th century, there is something else: the cold grip of an empire. Lermontov’s most famous poem—Mtsyri or “The Novice,” written in 1839—is an idyllic account of a Caucasian monk taken prisoner by a Russian army officer as a boy. The poem’s key emotion is a feeling of hopelessness: The proud and glorious history of the people of the Caucasus is in the past and gone forever, and the main character’s nostalgia for a lost past tells us that he belongs to the defeated side of humanity. In Ulansha, Lermontov’s early obscene poem, he recounts the collective rape of a woman by Russian soldiers; the text does not seem to have any visible sign of sympathy for the victim. Another poem, Kavkazets (“Caucasian”), hints that the true Caucasians aren’t the natives but the Russian soldiers who conquered the region in the early 19th century—just like Soviet soldiers sent to invade and occupy Afghanistan were colloquially called “Afghanis.”

Just as Lermontov constructed an imperial, colonialist Russian perspective on the Caucasus, Pushkin did so on Ukraine. Take Poltava, Pushkin’s poem about Ivan Mazepa, the Ukrainian hetman who rebelled against then-Tsar Peter the Great as he was tightening Russian control over Ukraine (and whom Russian President Vladimir Putin just invoked in a speech about regaining the lands of the Russian empire). For Ukrainians, Mazepa is a symbol of national resistance against Russian domination and a reminder that tsarist Russia broke a 17th-century treaty preserving the Cossacks’ (future Ukrainians’) autonomy in return for allegiance to the Muscovites (future Russians). For Ukrainians, Peter broke the deal; for Russians, any Ukrainian claim of autonomy was treachery—just as it is for Putin now. Pushkin takes the Russian view by depicting Mazepa as a lecherous traitor who would “spill blood as soon as water.” Ukrainians are to be pitied and despised, the poem suggests, as “friends of old and bloody times.”

Once you begin to look for it, you’ll find Russian literature chock full of imperialist discourse, romanticized conquest and cruelty, and silence about the consequences.

You will find the same message in Russian writer Nikolai Gogol’s famous historical novella about Ukraine: Taras Bulba. When Gogol—Ukrainian by birth—switched his identity to a Russian imperial one, he spent much of his talent to prove that all things Ukrainian are obsolete and, more importantly, cruel. In Gogol’s telling, they need the Russian empire so they can become civilized.

There was, of course, an alternative way of looking at things. A few years after Gogol and Pushkin crafted their image of the Ukrainian Cossacks as part of an obsolete and cruel past, Taras Shevchenko—a Ukrainian poet, painter, and national hero—was telling his compatriots that the Cossacks’ anti-tyrannical and proto-democratic spirit wasn’t a relic from the past but a harbinger of the future. Shevchenko’s view of the Caucasus was similarly different from Lermontov’s: not an idyllic landscape where romanticized Russian domination has erased history but a highly dramatic scene where imperial violence produces rivers of blood and resistance is strong and uncompromising. Boritesya—poborete (“Fight, and you will win”), Shevchenko’s iconic slogan of rebellion against tyranny, comes from his poem Kavkaz (“Caucasus”) and is equally applicable to the Caucasian and Ukrainian struggles against Russia’s imperial power. While Lermontov’s Caucasus is snow-white, idyllically cold, and remote from human suffering, Shevchenko’s Caucasus is blood-red and immersed in humanity’s battle for freedom. Lermontov writes a poem about a collective rape from the Russian perpetrators’ perspective; Shevchenko’s returning image is that of a pokrytka—Ukrainian for “fallen woman.” His provocative religious poem Mariia (“Mary”) draws a parallel between a Ukrainian pokrytka who bears an illegitimate child from a Muscovy soldier, perhaps after a rape, and the mother of Jesus—as lonely, suffering mothers. Empathy toward women who suffered sexual violence is Shevchenko’s response to Lermontov’s poetization of rape—where, in both cases, the perpetrator is Russian and the victim is a conquered subject.

Once you begin to look for it, you’ll find Russian literature chock full of imperialist discourse, romanticized conquest and cruelty, and silence about the consequences. Even if the work is ostensibly sympathetic toward the imperial subject, like Taras Bulba or Mtsyri, this empathy is a romantic notion about the subject’s sad destiny of eternal backwardness and subjugation. At the same time that European orientalism was developing an image of African and Asian societies as having no history worth telling, Russian literature was constructing an image of the Caucasus and Ukraine as societies whose violent histories deserved to be forgotten.

The parallels to today’s Russian politics of conquest are deep and wide. Pushkin’s “To the Slanderers of Russia” is a remarkable example of an anti-European pamphlet channeling aggressive Russian imperialism. His treatment of the 1830-1831 Polish uprising is in some ways similar to the Kremlin’s current view of the so-called color revolutions in the former Soviet empire. Pushkin openly threatens Europe with war (“Have we forgot to conquer yet?”) and reminds readers of the enormity of Russian power and conquests (“From the hot Colchian steppes, to Finland’s icy mountains”). There is a straight line from Pushkin’s ideology to today’s neo-imperial rhetoric. One of the Russian slogans during the Russia-Ukraine war has been “we can repeat”—deliberately recalling past wars of destruction and conquest to intimidate Russia’s imagined enemies. Similarly, Russian poet and Pushkin contemporary Fyodor Tyutchev, at the time of Europe’s 1848 revolutions, celebrated the Russian empire as Europe’s bulwark to prevent dangerous democracy from breaking out—just like Russia is today the authoritarian model for (and supporter of) anti-democratic forces on the right and left in Europe.

When Western scholars present the golden age of Russian literature in the 19th century as an intellectual struggle between Westernizers and Slavophiles, they miss the nationalist and imperialist undercurrents common to both. Even the so-called Westernizers believed in Russian exceptionalism, often turned into radical opponents of what they thought liberal Europe stood for, and frequently cherished a tyrannical model of society. Few authors better illustrate this phenomenon than Russian novelist Fyodor Dostoevsky, who turned from socialist radical in his youth to religious fundamentalist later in life. He famously said Russian socialists and communists were “not Europeans” and “will end in becoming a true Russian”—in other words, end up rejecting the West. In the novel Demons, Dostoevsky describes Western ideas as “demonic” seductions to be condemned.

Regardless of whether these writers superficially embraced Western ideas or not, their ethnonationalist, imperial prism helped lead Russia to more tyranny, not less. Dropped onto Russian soil, even Western progressive ideas morphed into a new and stronger tyranny—whether under Russia’s great modernizer Peter the Great or the Bolsheviks, whose murderous tyranny was built on European socialist ideas.

All these things continue today. When Russia destroyed Chechnya in the 1990s, sparked artificial separatist struggles in Moldova and Georgia in the 1990s, invaded Georgia in 2008, and invaded Ukraine in 2014, these acts of brutality had their intellectual underpinnings in the great Russian literary classics and their authors’ attitudes toward the empire’s colonies and conquests. To this day, these authors and their works are telling Russians that there is nothing to respect in the lands occupied by Russian soldiers. When Pushkin depicted Ukrainian Cossacks as bloody and cruel, this was just the 19th-century version of today’s propaganda narrative about Ukrainians as alleged Nazis whose historical fate is death and submission. When Tyutchev presents 19th-century Russia as Europe’s glorious savior from democracy, he is echoed in Putin’s fight to overturn color revolutions in Ukraine and elsewhere.

Of course, Russian culture is no single cause for Russian crimes, and the connection between culture and politics is never linear. But it is naive to think that Russian culture is innocent and free from the imperialist discourse that has been at the core of Russian politics for centuries. And although Western universities study imperialism and orientalism in Western literary canon—novelists Gustave Flaubert, Rudyard Kipling, and Joseph Conrad immediately come to mind—they have almost completely ignored similar strains in the literature of the world’s last unreconstructed colonial empire, which is fighting another war of imperial conquest as I write.

So if you’re looking for the roots of Russia’s violence against its neighbors, its desire to erase their history, and its rejection of the ideas of liberal democracy, you will find some of the answers on the pages of Pushkin, Lermontov, and Dostoevsky.

Volodymyr Yermolenko is a philosopher, editor in chief of UkraineWorld, director of analytics at Internews Ukraine, and host of the Explaining Ukraine podcast. Twitter: @yermolenko_v