Semantic Corpus|Security|Famine in Europe. How is it even possible in the 21st century?
Security

Famine in Europe. How is it even possible in the 21st century?

These days we often hear about issues in global food security but could it soon affect Europe? Unfortunately, the war in Ukraine has become the major factor in determining economic stability in the world. What’s the reason for this? by TOMA POPOVA 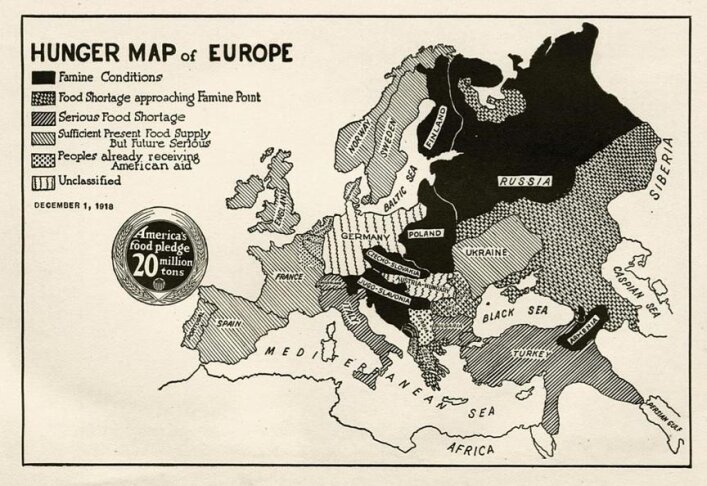 Ukraine is one of the most important suppliers of agricultural products to countries in Europe and around the globe. Ukraine is one of the top three food providers to the global market. Currently, the country is fifth largest in wheat exports, fourth in corn, third in barley, and the first in sunflower oil exports. Therefore, Ukraine alone sustains more than 400 million people, outside of its own population.

According to Bank of America, 12% of the 207 million tons of wheat in the global trade is made by Ukraine. Moreover, the United States Department of Agriculture (USDA) reports that, before the Russian invasion, Ukraine exceeded its typical export volume while Russia was slowing down. Ukraine exported $27.9 billion of agricultural products in 2021 – almost 25% more than the previous record number of $22.4 billion in 2020, according to the Deputy Director of the National Research Center “Institute of Agrarian Economics” and NAAS professor Mykola Pugachev. He also claimed that Ukrainian agricultural exports to EU countries, including Great Britain, increased by 12% ($8.4 billion) compared to the record number in 2019 ($7.5 billion). At the same time, the EU’s share in Ukraine’s agricultural exports was 30.1% last year. There were optimistic expectations regarding increasing the global import market and thus decreasing prices for specific product types but …

Russia unleashed a cruel war upon Ukraine, causing economic and agricultural crises and even exacerbating hunger. The whole world is watching the gruesome events unfolding in the heart of Europe. But the EU also needs to worry about the humanitarian collapse in many Ukrainian cities. In the occupied cities and towns, Ukrainians are starving. The irony, right? Citizens of the country that feeds 400 million people worldwide are on the verge of starvation. “But what is the government’s prognosis for the rest of Ukrainians and their exports?” – these are the questions troubling leading economists.

First Deputy Minister of Agrarian Policy and Food of Ukraine Taras Vysotsky states in a Forbes interview: “Firstly, I want to assure you that Ukraine won’t starve. We have reserves for years to come. We’ve already started the sowing campaign. There is no shortage of any of the food items. We’ve also started buying grains and other supplies from farmers at the expense of the state budget. We have much more food than we need, but if these surpluses do not go to other countries, it could cause a crisis or starvation. Also, we need foreign currency to support our economy.”

And then it seems, what’s the matter? Ukraine is ready to export large amounts of food. The world is all set to consume it – considering declining supplies from Russia due to economic sanctions imposed on the aggressor country.

Currently, the main issues Ukraine and, thus, the world are facing are the logistic ones. According to Taras Vysotsky, the main paths of export are located in the seaports of Odesa and Mykolaiv. These ports are currently they are blocked off, causing interference in exports. Let’s compare. According to official data, Ukraine used to export about 5 million tons of agricultural products per month. During the first month of the war, this figure decreased to 0.5 million tons of grain in that month, losing Ukraine $1.5 billion, and the whole world lost millions of tons of products. There will be consequences for everyone.

“Russia’s attack on Ukraine has led to a sharp rise in world wheat prices, exacerbating already high food prices” states CNN and CNBC. Looking back to early March, wheat futures rose by about 5.35%, reaching the prices not seen since 2008.

According to Andriy Yarmak, an economist at the Food and Agriculture Organization of the United Nations (FAO), the biggest problem right now is the terrible cheapness of goods inside the country. Until the seaports are unlocked, there is nothing you can do about it. Grain and oilseeds will be very cheap for Ukrainians and very expensive for the world. After unlocking the ports, prices will level off, but not before, despite all efforts.

For two days in a row, wheat was at the “limit”, meaning that it had reached the highest amount by which the price of goods can rise in one day. This situation can only get worse. A successful sowing campaign in Ukraine and the establishment of new export routes will be crucial.

Taras Vysotsky claimed that there are three ways to establish new export routes: by water, using the Danube river; by land on Ukrainian and European roads; and by rail. However, each method has its problems.

The Danube ports have limited capacities and can handle no more than 30% of exports. Before the war, there had been no need to invest in this type of transport as there were efficient Black Sea ports. “70% of goods could be sent by railways, but there are still issues. European railways haven’t been actively used for transporting grains in the past. In Ukraine and Russia, the width of rails is different. That’s why we need to look for European grain carriers and reload onto them. It’s not a common practice in Europe and therefore there is a lack of locomotives, rods, and transshipment points with terminals. We are currently actively working with European partners on this issue because, otherwise, we will move exports stored in our warehouses for about three years,” said Taras Vysotsky. Currently, the railway sends up to 30 thousand tons of grain daily. It is necessary to work more intensively on optimizing the railway service in order to increase the export of agro-industrial products to European countries.

Mykhailo Malkov, Chairman of the UBTA Agrarian Committee, an expert on a number of UN programs, notes that the problem of port unblocking is getting worse every day. And if Europe is not threatened by famine, at least in the near future, then Third World countries have already experienced shortages of agricultural products. The biggest problem now is the filling of granaries in Ukraine, and it is impossible to take out the harvest of 2021 with the necessary volumes by land. That is why they are currently trying to find a way through diplomatic channels to unblock ports and resume exports of Ukrainian products by sea.

UN Secretary-General Antonio Guterres has already stated that the whole world is facing the collapse of the global food system. Meanwhile, a sowing campaign has started in Ukraine in 21 regions that are not under temporary occupation (there are 24 regions in Ukraine plus the Autonomous Republic of Crimea, which is currently temporarily occupied by Russia). As of April 2nd, the projected sown areas of the mainspring crops for the 2022 harvest in the Ukraine-controlled territory are 13,438,400 hectares, which is 3,477,900 hectares less than last year. The Russian invasion has already made it impossible to sow 25% of the arable land, which inevitably worsens the forecasts for this year’s harvest. In turn, that will lead to higher prices for certain categories of products and, possibly, a global food crisis. The most affected will be countries in Africa, the Middle East, and Southeast Asia. In particular, Libya, Syria, Yemen, and Egypt only have food supplies for 3-6 months. Food shortages could lead to a new spike in the migration of refugees from these countries.

Another problem that affects the world is the consistent destruction of critical infrastructure by the Russian army. The occupiers are trying to destroy the economy of Ukraine while also affecting the economy of the whole world.

The government is reacting accordingly to the devastating events in several Ukrainian regions and seeks ways to quickly resolve issues with the re-equipment of production in the agricultural sector that will satisfy everyone’s needs.

Andriy Yarmak: “It is impossible to replace Ukraine on the market of grain, sunflower oil and, especially, fodder components. That is why Ukraine’s victory is very desirable for most countries in the world.”

The invasion by the Russia has already influenced the food security of many countries globally. Every day of the occupiers’ aggression on Ukrainian land accelerates the economic and agricultural crisis.

Mykhailo Malkov: “The aggravation of the food crisis in the world due to the war in Ukraine must increase international pressure on Russia. Victory is important not only for Ukrainians, but for the whole world. On our part, we use all possible levers and arguments to resolve the issue of resuming the supply of Ukrainian products to world markets as soon as possible.”