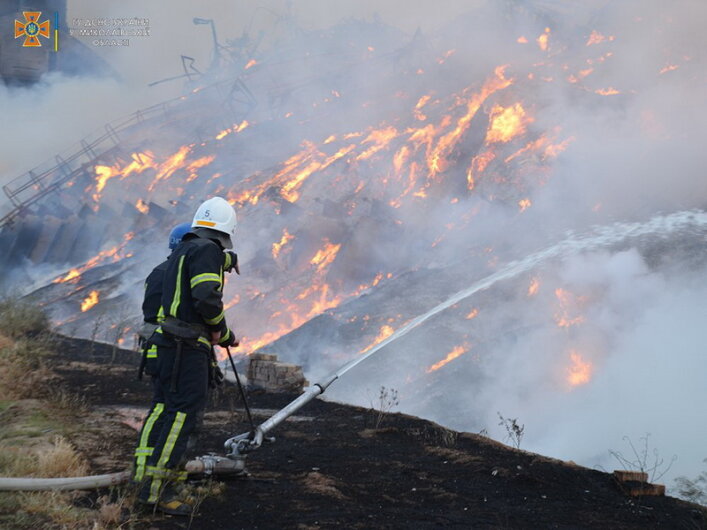 While Russia attempts to annihilate Ukraine with bombs and rockets, the rest of the world is shuddering from the explosive growth of food prices. We can only stop the food crisis by stopping the war.

The full-scale war waged by Russia in Ukraine is not just an attempt to physically destroy the Ukrainian nation. This enacts a plan to put pressure on all the countries of the world. The war is clearly demonstrating the extent of our global interdependence. The global economy depends on the export of agricultural products from Ukraine, which subsequently affects what will be available in 190 countries and how much it will cost.

In 2021 alone, Ukrainian agro-food exports provided food supplies to around 400 million people, making Ukraine a guarantor of food security in many countries.

The Russians are deliberately destroying fuel storages and mining fields to disrupt the sowing of Ukrainian crops. They shoot up entire cow farms and bomb grain warehouses to create a food crisis. The Russian army is blocking seaports from where products were exported to various countries around the world.

According to Taras Vysostky, the First Deputy Minister of Agrarian Policy and Food of Ukraine, 90% of exports are made through the ports of Odesa and Mykolaiv. However, these ports have been closed for over a month now.

As a result, Ukraine exported four times less corn, wheat, soybeans, and oil in March than in February.

“Russia, in addition to blocking Ukrainian ports, is imposing restrictions on the export of grain and mineral fertilizers. This has already affected world prices and will certainly have an impact on future harvests, which will be reflected in their price and affordability. Such actions of the aggressor are a deliberate provocation aimed at making the world dependent on Russia”, said Taras Kachka, Deputy Minister of Economy of Ukraine.

According to Minister of Economy of Ukraine Yulia Svyrydenko, the occupiers are attacking metallurgical enterprises and agricultural infrastructure in order to prevent the restoration of our capabilities in the future. These attacks threaten not only Ukraine, but the entire world, because our country has provided ensured food security in a multiple countries in Africa and the Middle East.

Almost half of the world’s sunflower-seed and safflower oil exports come from Ukraine, which is not only used directly for food and cooking, but also for the production of mayonnaise, margarine, and more. It is difficult to replace it with other oils.

However, producers must look for alternatives due to the drop in sunflower oil exports from Ukraine. Accordingly, prices for other oils like palm, rapeseed, and olive oil have increased. This is creating a domino effect. Manufacturers are now looking for something to replace sunflower oil, demand is increasing, and prices are rising accordingly. Already, prices have reached record levels.

According to the FAO (Food and Agriculture Organization), world food prices could rise by 20%.

The rapid increase in prices is likely to lead to civil unrest in the Middle East. For example, the head of the International Monetary Fund (IMF), Kristalina Georgieva, compared the situation to the Arab Spring in 2011, when anti-government protests erupted in the Middle East because people could not feed their families. She stressed that the sooner the tanks are taken out, the sooner the tractors will come in: “We need the harvest in Ukraine to contribute to the stability of food prices by July.”

Countries that have food stocks may expect only rising prices, but a real famine is forecast for multiple African countries. In early April, more than 10 humanitarian organizations said that West African countries are facing the most severe famine in recent decades. This is due in part by the war in Ukrain, in addition to climate problems and local conflicts. 38 million people may go on hungry in June. Currently, 27 million people currently suffer from food insecurity.

For its part, Ukraine is doing everything possible to provide food for itself and the countries to which its products are exported. Our farmers go out into the fields under bullets overhead and sow spring crops. Some of the export products are sent by rail. However, this is not enough. It will only be possible to stop the onset of high prices and famine by stopping the enemy. And our only enemy is Russia. Strengthening effective economic sanctions, providing Ukraine with weapons and air defense, and expelling Russia from all international alliances will help avoid a catastrophe. If your country buys gas from Russia, you’re financing the blockade of Ukrainian ports and causing rising prices and famine in Africa. We need to break this chain of trouble and defeat Russia for the good of the world.