“Don’t sponsor our deaths”: why dependence on Russian gas is very similar to drug addiction

How Europe got into it and how to get out now 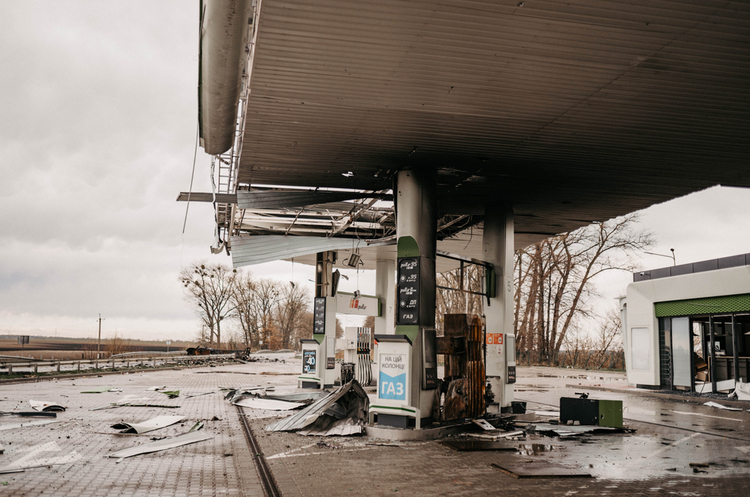 24 February 2022 is the date when Ukrain began the count of ruined houses, murdered civilians, and dead defenders who rose against Russian aggression in this unequal fight. That day at 5 AM Ukrainians shuddered from the powerful explosions throughout the demarcation area with Russia and Belarus. Dozens of Ukrainian and international media outlets wrote about the open Russian aggression, which was subsequently acknowledged and condemned in the resolution of the UN General Assembly on 2 March 2022.

What will Europe remember about this day? Would it be a day when they had to choose between humanism and comfort? Just like a cancerous tumor, Russia is firmly established in Europe by selling its natural resources – oil and gas. Because of this, Russia believes that it can afford any bloody games, whether that be the conquest of territories creating unrecognized republics, of which there are already a dozen in around the world (Transnistria, the Kuril islands, Karabakh, and Abkhazia, just to name a few), or a full-scale war in Ukraine, whom Russia had called “fraternal people” up until the very last moment while simultaneously “programming” their own people to hate and thirst for murder under the slogans of “denazification” and “demilitarization”.  Maksym Gardus, an expert at the Office of Reforms of the Cabinet of Ministers of Ukraine, told Mind how Russia uses energy weapons in its relations with Europe and how it affects Ukraine.

Russia prepared well for the attack by entering into international gas supply contracts and thus binding more and more European and global nations, and gaining control by threatening to cut them off. According to the European Union Agency for the Cooperation of Energy Regulators, in 2020 nearly half of the gas imported into Germany came from Russia. Russian gas accouned for almost 46% of Italy’s gas supply and a quarter of France’s gas. At the same time, North Macedonia and Moldova relied exclusively on Russian gas, with Finland and Latvia being at over 90% reliance.

Countries’ dependence on Russian gas in 2020 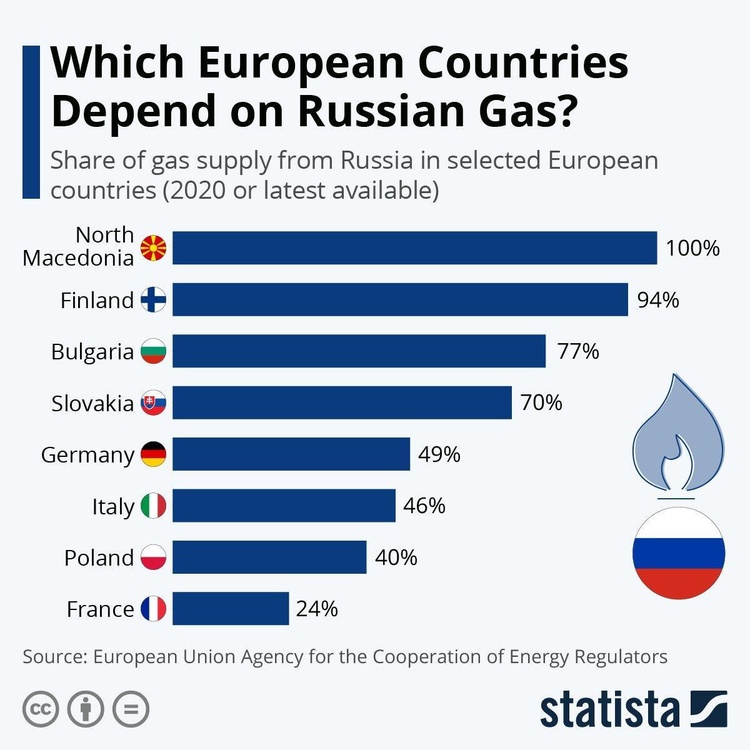 Russian gas dependence is similar to a drug addiction that has been gradually advancing over the years, and now the countries must go through all the stages of overcoming the problem from denial and anger to acceptance and go through 12 steps of liberation from addiction.

Why can’t European countries, countries with an adequate worldview and understanding of the whole picture of events, decide to completely abandon Russian gas? Why is it that, on the one hand, these countries provide assistance to the Ukrainian army and refugees, and on the other, they pay for Russian gas, thereby financing the war?

This thesis is confirmed by the statement (source in Ukrainian) of the High Representative of the Union for Foreign Affairs and Security Policy Josep Borrell in the European Parliament. According to him, since the start of the war in Ukraine, European countries have paid Russia 35 billion euros for energy, while the amount of financial support to Ukraine has been 35 times less. European countries seem to be helping us as well, but for fear of losing their own comfort, they cannot make important decisions about terminating “bloody” contracts.

In its “gas game”, Russia has gone further and set the ultimate conditions for payment for gas in rubles instead of euros, as stipulated in the contracts. The Kremlin leadership understands the terrible economic consequences of the war with Ukraine for its state.

Only Russian state channels talk about how their economy is good and the sanctions are “invisible” to the budget. Russia’s economy is already on the verge of default, and the population is falling below the poverty line. Trying to keep the economy afloat for as long as possible, Russia has issued an ultimatum on the currency of payment with the threat of gas cut-off. However, contrary to Russia’s expectations, the European Union and the G7 countries have not accepted these conditions. The G7 includes the United States, Canada, France, Germany, Italy, Japan, and the United Kingdom. In addition, a number of countries have already cut off gas supplies from Russia or decided not to sign new contracts. Thus, since the 1st of April, the Baltic States have refused to purchase gas from Russia. Starting in 2023, after the expiration of the current contract, Poland plans to give up Russian gas. In turn, the European Union has drawn up a plan to completely abandon Russian gas, oil and coal by 2027.

Thus, the plan for “ruble resuscitation” of the economy has already failed with the largest exporters. Now the choice is up to Russia – whether to leave the payments for gas in euros and dollars, or to confirm their loud statements with actions, cut off supplies, and remain almost without the last shreds of financial income. Only Hungary (source in Ukrainian) has agreed to Russia’s terms of payment in rubles. Moldova also pays in rubles, but this was stipulated in advance in their contract. Although Bulgaria has agreed to pay in rubles, it will be until the end of this year. This is not the kind of capital that can significantly affect the situation.

Is Europe willing or can it give up Russian gas?

European leaders are well aware that they are dependent on the natural resources of the aggressor country, however they are not ready to take decisive action and impose a full embargo on supplies. They are still afraid that the level of comfort for citizens will decrease a bit, the prices for energy will increase, and so on. But will the refusal of Russian gas by importing countries or even a complete embargo on gas and oil purchases really have tangible consequences for the average European?

According to estimates by the leading German economists, the embargo will cost their country 0.5 to 3% per capita, which is even less than the economic losses from the COVID-19. The embargo will have an even smaller impact on the French economy, with GDP losses estimated at 0.15-0.3%. For some countries, such as Bulgaria, the Czech Republic and Lithuania, the abandonment of Russian energy will reduce GDP by 1-5%. This is a slightly higher level, but completely manageable. Especially if you assess the volume of cash flow from the purchase of resources from the aggressor country. According to the research organization CREA, in 2021, European countries paid more than 202 billion euros for Russian energy. The loss of such a source of income, even temporary, will be an effective lever of influence on Russia. 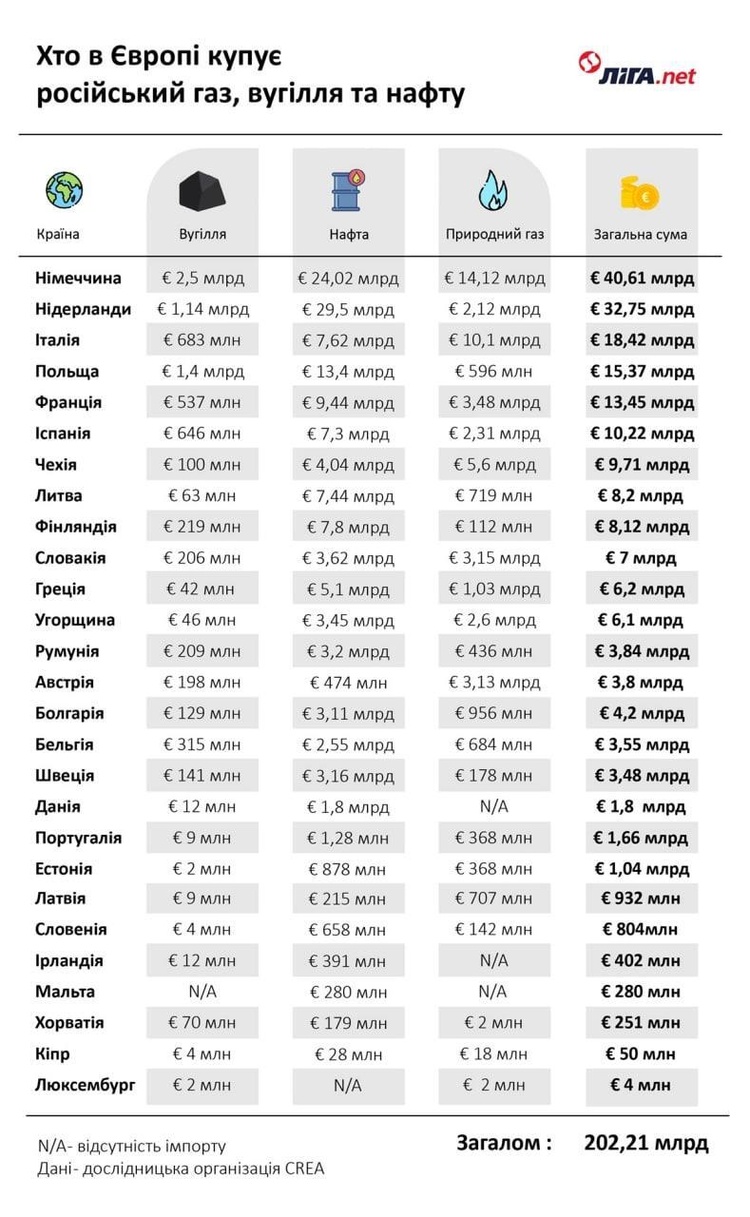 So is the European leadership frightened of the economic consequences for citizens or of the way to solve the issue of replacing the gas exporter? After all, we need to look for other options, enter into new contracts, and replace imports.

How did putting Europe on the “gas” needle go?

The first stage of “gasification”, as with drugs, is difficult to call addictive. These are the first uncertain steps, attempts, curiosity rather than necessity. At this time, Russia was “flirting” with Europe, offering contracts and interesting prices.

The second stage is to buy some gas from Russia, which can satisfy any appetite and has a large enough stock for sale of any required volume. Loyalty pricing policies force us to become more dependent than in the first stage, cutting off supplies from other countries. At this stage, working relations with Russia are still simple and cost-effective.

The third stage is the moment when countries understand that work with Russia is not without pitfalls. It is time to renegotiate contracts that are no longer as profitable as they were in the early stages, and Russia’s rhetoric is getting tougher. However, having become almost completely dependent, there is a choice between accepting new conditions or reversing the course by 180 degrees.

At this stage, few addicts are ready to take matters into their own hands and start fighting the problem. In terms of logistics, purchasing countries would have to start looking for new suppliers, thus exposing themselves to the danger of a shortage of gas from new ones and refusal to supply from the old gas supplier (Russia). Therefore, in such a situation, almost everyone, with heavy thoughts, climbs into the grip of the fourth stage.

The fourth stage is final. This is complete dependence on the supplier, and, as a consequence, direct consent to all their conditions and whims. This fully opens the door to blackmail and intimidation. The consumer was driven into this trap from the first step, and now they will either have to escape despite economic threats or remain hostage forever and, in the current situation with Russia, become an accomplice in the mass murder of Ukrainians. This is the moment when it is very important to make the right choice.

Russia’s monopoly as a supplier of gas to a number of European countries makes them dependent on the aggressor country and thus complicit in its atrocities.

Getting out, finding new suppliers in an emergency, and concluding lucrative contracts can be difficult, so gas-hostage countries continue to import gas, financing the killings and destruction of Ukrainian cities and thousands of lives.

No financial support will help save lives and stop the war while the aggressor continues to receive capital to fight. An embargo will effectively block the flow of money into Russia and stop its bloody terror. Do not be complicit in the murders, do not finance the war for your own comfort.