In the weeks leading up to the invasion to Ukraine, Kremlin propaganda apparatus went out its way to convince domestic audiences that Russia does not want to start awar, but it cannot stand aside and observe actions of Ukraine, which os filled to the brim with Western weapons. Warmongering rhetoric and hatespeech, used by the main television channels, was aimed at making the audience believe that Russia has no choice but to save its oppressed compatriots and to stand up to the West and its loyal puppet, Ukraine.

On February 24, the whole world woke up to pictures and videos of Russian tanks crossing the Ukrainian border, missiles flying right into residential areas of Kyiv and other major cities, terrified Ukrainians trying to flee their country and many more staying to defend it. Many people, especially in the West, raised the question – why? Why does Ukraine need to be ‘denazified’ and ‘demilitarised’? However, as for people inside Russia, this question was answered for them, throughthe wide-reaching spider web of Kremlin propaganda outlets.

The case study of two talk-shows aired by the Kremlin-controlled TV channels Time Will Tell (Channel One) and 60 Minutes (Russia-1), aired throughout February 1-22, 2022, showed that therewere clear attempts to justify the full-scale invasion to Ukraine through warmongering rhetoric and incitement to ethnic hatred.

The baseline for the discussions held in the studios was that “Russia is not going to attack” – it is theWest who poses threat by filling its vassal Ukraine to the brim with modern weapons and causing hysteria in the media. Concerns were voiced that while Russia peacefully defends its interests, weapons supplied by the West are definitely going to be used ethnic Russians living in Donbas, if not Russia itself – and it that case Kremlin will have no other choice but to save its own people.

After watching three-weeks’ worth of these talk-shows (32 episodes in total), DebunkEU.org analysts singled out four strategic goals which Kremlin might have been attempting to reach through its communication.

The messages discerned from reviewing the content showcase how the domestic television landscape was firstly used to justify the planned attack on Ukraine: we defined it as the goal ‘Create casus belli so nobody doubts the necessity of the ‘military operation‘. It was all about prepping the Russian audience, by providing it a pretext of fighting the ‘Nazi, junkie-head, illegitimate Ukrainian authorities’ and ‘armed radicals’, and defending ethnic Russians who allegedlyface genocide in Donbas, and/or the (majority of) Ukrainian population, who are under the suppressive, illegitimate regime of Zelensky. The latter motive was used to make sure the audience would support the change of the Ukrainian government, which would be swapped for a Kremlin-controlled puppet regime.

Further on, false and misleading information such as false flag operations were meant to make the audience more accepting to the casualties (military and civilian) in Ukraine and see them as necessary sacrifice. Such messages are needed to paint the picture of sacred mission, some sort ofcrusade, of saving/liberating people from the Ukraine, which is hostile, militarized, and is (irrationally) opposed to anything Russian.

This, in turn, was served in parallel to the claims about how the West was manipulating Ukraine for its own profits, and have the audience believe that invasion in Ukraine is in their own interest in confrontation against the West. Such rhetoric is used to direct all the blame and any dissatisfactionwith the current domestic affairs at this cunning enemy, strengthening the support for the Putin regime.

The analysis has shown that the messages/narratives and the technique of malign rhetoric (ad hominem attacks, verbal ruses and insults, sexual subtext) brought elements of hate speech, which may be seen as in contradiction to Article 20 of the International Covenant on Civil and Political Rights, which requires countries, subject to reservation/declaration, to outlaw vilification of persons on national, racial, or religious grounds.

When it comes to the Kremlin propaganda apparatus, television (simply because of its specificalitiesas a medium) creates many additional layers of persuasion which textual information cannot provide. Television can employ a variety of framing modes, created through spoken, written, audio, and visual cues. Images and videos evoke powerful emotional responses, based on the preconditioned worldview the audience might already have, while textual and spoken framings “tellus, in words, exactly how the subject’s expression ought to be read”. Combined with the ease of access to television content (it does not take much effort to find information – one button on the remote and that’s all), the whole arsenal of textual and audiovisual tools creates a perfect environment for framing a political agenda.

Therefore, it is not surprising that after coming to power in 2000, Vladimir Putin made sure to take all independent press, and especially television, under the control of the state. And since then, the chokehold around the media is getting tighter and tighter. For 73 percent of Russians, television is aprimary source of news, more than half of them trust it. Therefore, unsurprisingly, there is a slang term attributed to Russian TV – “zombiebox” (Rus. Зомбоящик). 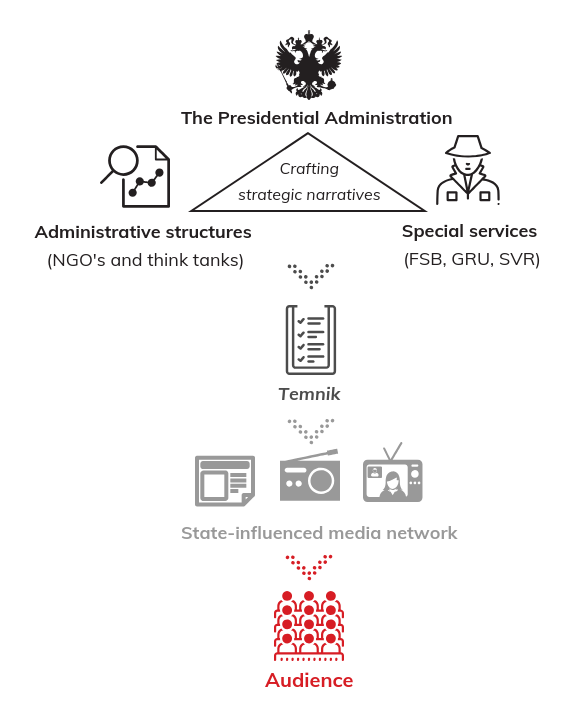 The content of information influence campaigns is largely determined by the Presidential Administration. There were also specialised administrative structures created to support Russian influence operations. People working there are directly responsible for generating ideas and determining the direction and content of Russia’s information policy. Notably, information policy priorities are also established by the Russian special services – the GRU (Main [Intelligence] Directorate), the FSB (Federal Security Service of the Russian Federation), and the SVR (Russian Foreign Intelligence Service).

The so-called temnik, a kind of guidance from Russian authorities on the main topics and stories, given to the media managers and further on to staff. Temnik means ‘theme’ or ‘agenda’, with a connotation to another Russian word temnota, which means ‘darkness’. According to the statements from media editors working in Russia, temnik is a verbal guide and is practised through meetings and phone calls. Very often, the call comes from the President’s Administration. A former employee of the VGRTK media holding (to which Rossiya 1 channel belongs) told that days after the annexation of Crimea 2014, the host who appear on the screen were given a list of names to call the Ukrainian government an/or army: ‘junta’, ‘Banderovites’, etc. The editors also were given lists which experts to invite to the shows.

Substantial amount of money is also being poured into these television channels. Those which became the subject of this analysis are amongst the most important ones. Russia – 1 (Rossiya 1) belongs to VGTRK (All-Russia State Television and Radio Broadcasting Company), which is completely state owned, and received 24 billion RUB (282 million EUR) from the RF budget in 2020. Channel One (Pervyj Kanal) is the largest producer of information content in Russia, one of the main structures of the information influence mechanism. In 2020, Channel One received 6,5 billion RUB (76,5 million EUR) from the state budget. More about the funding attributed to the mass media from the Russian budget – here.

After reviewing the data within the framework of this analysis, we’ve extracted 43 messages cohering into a series of six narratives dealing with/targeting Ukraine. 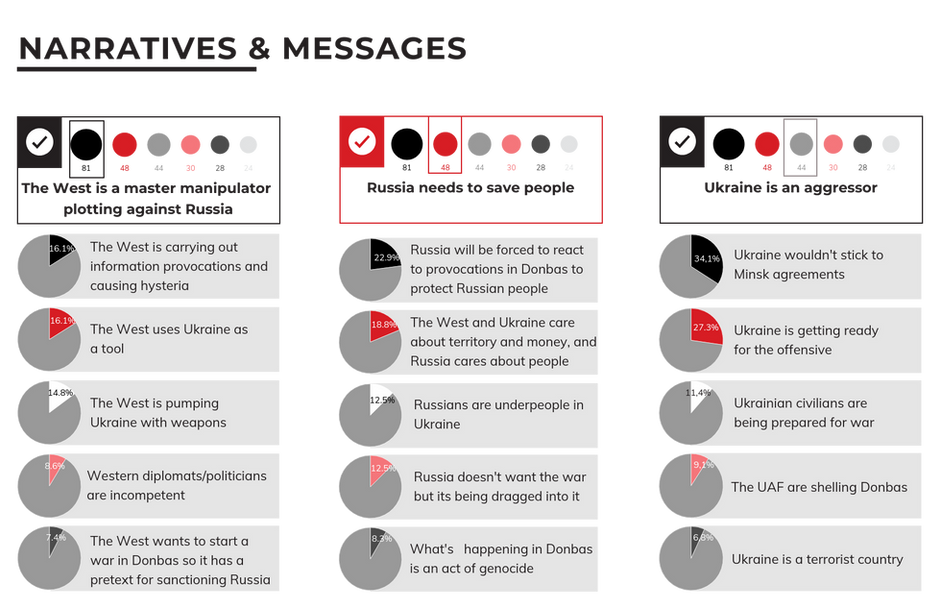 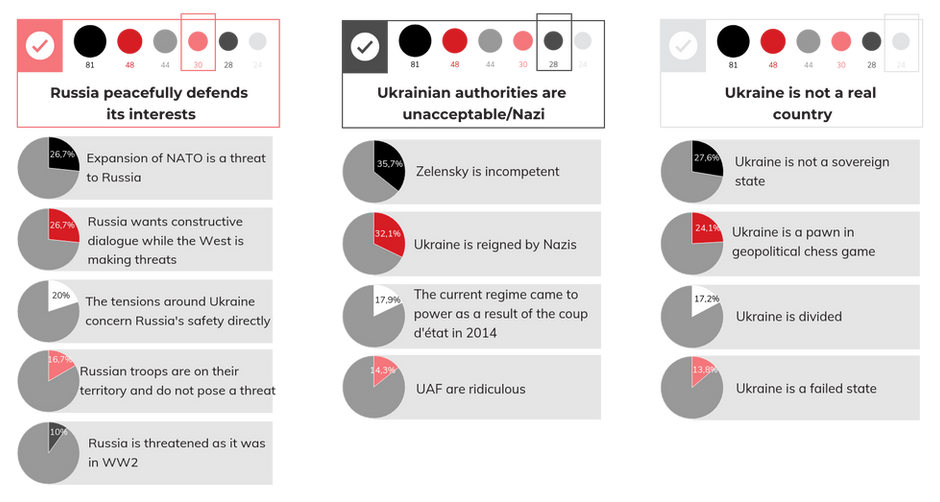 After having watched 3-weeks’ worth of these shows, it became clear that actually before the war started, both TV shows focused more on the conflict of Russia with the West, Ukraine was more on the side-lines – which is evidenced by the line-up of the narratives.

The West is the master manipulator plotting against Russia – this is how the escalating tensions between Russia and Ukraine were famed, as a twisted plan created by the West. This narrative tooka up a third of all message mentions.

The second narrative in the chart – Russia needs to save people. During the weeks leading up to the start of the war, the main message under this rhetorical line was that ‘Russia will be forced to react to provocations in Donbas to protect Russian people’. This message plays into the more emotional side of the ‘Russia vs West’ confrontation – the aim is to make the audience feel like the government and the army of their motherland is doing something great. Also, it was very often emphasized that there are Russian citizens living there, and they are being killed by Ukrainians, just because they are Russian.

The narrative that Ukraine itself is an aggressor placed third, unsurprisingly so, because the most attention fell on the West – how they are stuffing Ukraine with weapons (saying that a loaded gun isdeemed to shoot, and it will shoot into the direction of Russia), how the Western leaders are totally incompetent and are igniting the tension with their statements about an attack from Russia.

As for Russia peacefully defends its interests, fourth place in the chart, it was mostly based on accusations thrown at NATO about creating an environment of military tension and posing a direct threat to Russia is mainly based on the story of an alleged promise given by NATO leaders in 1997 not to expand the Alliance to the East (which was debunked). This myth was taken as an example of how it is nearly impossible to agree with the West, which constantly turns a blind eye onRussia’s “security concerns”.

Talking about all western leaders, and president Zelensky or other Ukrainian representatives, the presenters and the guests really didn’t hold themselves back – for example, UK Foreign Secretary Elizabeth Truss was called outright dumb and stupid. In another example is form 60 minutes, a guest ridiculed Ukraine’s plea to get more weapons and said, “they asked for Javelins and got some Vaseline”. Such rhetoric was also used in the shows where the sixth narrative, Ukrainian authorities are incompetent/Nazi/unacceptable.

And the last narrative to mention, Ukraine is not a real country/is a failure. Both hosts and experts invited to the talk-shows went to great lengths to diminish the statehood of Ukraine, claimed that Ukraine is an artificially created state (echoing statements made by Putin), which has sold its sovereignty and independence to get Western aid. It was also alleged that the real decision makers are the US, UK, Germany, and France – Ukrainian president Volodymir Zelensky is just a clown, put in the presidential palace to create a show of Ukraine being a legitimate state.